Kentucky Congressmen Won’t Show Up To Town Halls, So Their Constituents Replaced Them With Literal Empty Suits 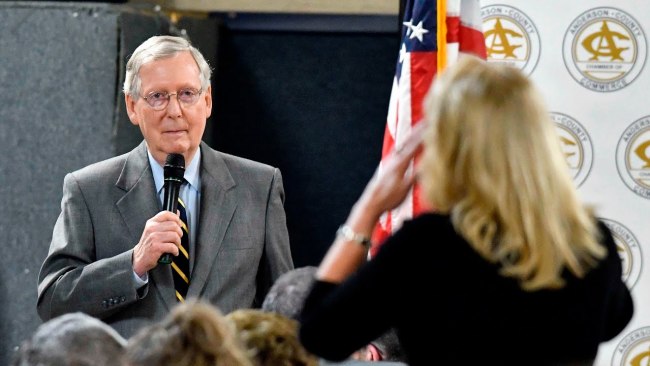 It’s looking shady down in Kentucky.

Today, constituents in Lexington, Kentucky held an “Empty Suits” town hall for Senator Rand Paul, Senate Majority Leader Mitch McConnell, and Representative Andy Barr (R-KY). (You may remember McConnell’s previous town hall, in which he got called out for his sexism and deflection.) All three representatives received invitations at both their D.C. and Kentucky offices, but none of them showed up. Luckily, a trio of equally useful, literal empty suits could be placed on stage in their stead.

As documented on Twitter, the constituent concerns were wide-ranging. They included demilitarizing the police, preserving the Environmental Protection Agency (EPA), stopping Trump and Paul Ryan’s war on the poor, and decreasing foreign wars and bombings. Immigrant constituents voiced their concerns about the administration’s xenophobic policies; nurses advocated for the Affordable Care Act (ACA). The organizers also collected letters on these issues.

While many Republicans have charged that the widespread anger at their town halls is the result of partisan, pro-Democrat organizing, one of the organizers from Empty Suits says this isn’t the case in Kentucky. Richard Young, one of the town hall organizers, described the coalition behind the town hall as relatively politically diverse in an interview with WUKY. “It ranges from people that are very, very progressive to disaffected Republicans, [for] who[m] this is the only election in their entire lifetime that they did not vote for a Republican.”

While I love the passion, drive and cleverness behind town halls like these, I’m still waiting to see how well they translate into one of the most direct and consequential political actions open to us: the vote. Los Angeles had one of the largest women’s marches in the country, but less than 12% of the city voted in their March 7 local election. Contrasts like that give me pause; organizing translates most easily into change when we show up at the ballot box. Still, given the unprecedented anger and organizing that Trump’s administration has stirred up, it’s hard not to see this as a unique moment in American politics.

“That passion for what’s happening within our government is something that we should have had for a very long time,” said Young, “and I think we have it at moments of crisis–and for a lot of people, this feels like one of those [moments].”