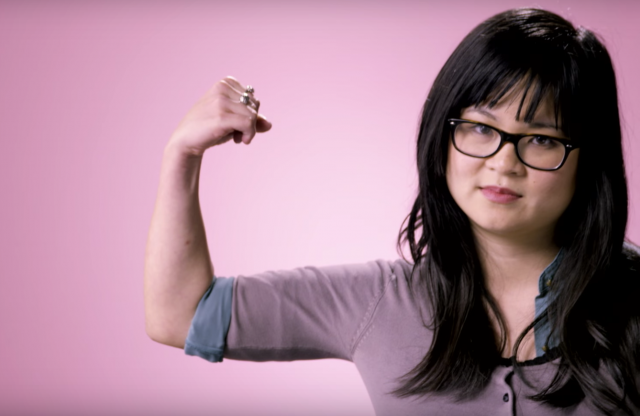 John Boyega answered a question about what folks should be excited for in Episode VIII, and his answer was that there’s a brand new star in the Star Wars universe, and that star belongs to newcomer Kelly Marie Tran. The question was asked during an interview before the premiere of the documentary shipping with Force Awakens blu-Reys, and Boyega’s answer was enough to get folks tweeting excitedly about the future of Star Wars.

On the one hand, it’s exciting to see someone as prominent and central to the Star Wars universe speak so highly of a new star, as it definitely bolsters expectations around the next adventure. On the other, saying Tran is the next big star of Episode VIII is nothing short of major, as she would be the first Asian female lead actress in a Star Wars movie.

I’ve written before about Asian representation in The Force Awakens and how important it was to see Asians getting some fairly good representation in the Star Wars universe. To be fair, though, improving on the Neimoidians (who were coded Asian, let’s not lie to ourselves) wasn’t going to be to difficult. That being said, it was great to see characters like Admiral Statura and Jess freakin’ Pava show up on screen like it was no big deal. Moreover, it was great to see them survive. It feels really sad to think that this is what the expectations are these days, but boy am I glad that they lived.

When Tran was announced as part of the upcoming cast, folks began to question what her role might be. As I’ve already said, she’s a relative unknown, with most of her screen credits coming from College Humor and various assorted television shows. If what Boyega says holds true, and if Tran’s role is as large as I’m hoping it might be, then the future of Star Wars is looking mighty fine.

Anyway, you can now begin your rampant speculation as to what her role might be. One of the favored theories I’ve seen suggests Tran plays Leia’s right hand woman, possibly as another general or other military executive. I dig that theory, but personally, my wacky out-of-left-field theory is that she’s totally a Knight of Ren, possibly one of the ones featured in that lightsaber flashback scene in Rey’s dream.

Or, hell, she might be Pava’s sister, who’s more of an infantry type. Who knows! What do you think?!