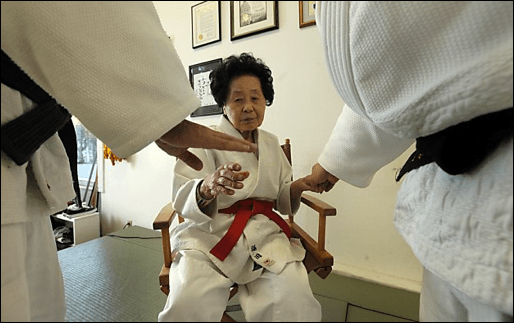 Earlier this week Sensei Keiko Fukuda was promoted to 10th dan, the highest rank that the martial art of judo awards, at the age of 98. Only three other people in Judo’s more-than-a-century long history have ever earned 10th dan, all of them men.

From the San Francisco Chronicle:

When Kano offered to train her in Judo in honor of her grandfather, her mother and brother supported her, assuming that she would marry one of the men she trained with and settle down. Instead, she became a Judo instructor at the age of 24 and never married. She earned a degree in Japanese Literature; broke the glass ceiling of 5th dan, above which women were not allowed to be promoted until 1972; and taught Judo at Mills College for nine years before founding her own school in San Francisco.

Personal motto? “Be gentle, kind, and beautiful, yet firm and strong, both mentally and physically.”

Well, I suppose if being Wonder Woman is too fictional of a role to pursue, we can at least strive to be more like Keiko Fukuda.

(story and pic from SFC, via Neatorama.)