Kate Winslet to Go to Space After Saving Woman From Fire; Is Captain Marvel, I Guess? 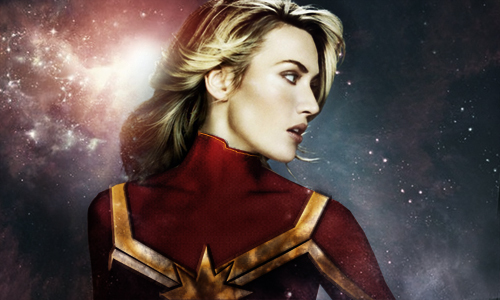 For anyone who isn’t up on their superheroes at the moment, Captain Marvel is the current alias of Carol Danvers (yes, a Marvel superhero, not like that guy who shouts Shazam, and now also goes by the name Shazam), an Air Force pilot turned superhero with a love for high altitudes, space, and saving the day.

We didn’t immediately make the connection between Ms. Danvers and Kate Winslet when we heard that the latter was getting a free trip to space courtesy of uncle-in-law Sir Richard Branson, but then we dug into the details of the story and the details took a surprisingly heroic tint. The gift of the £124,000 ($200,000) ticket is partly a wedding present (Winslet married Branson’s nephew earlier this month), and partly a gift of thanks for… saving his ninety-year-old mother from a fire. Really.

We’re surprised that this is the first we’ve heard of Winslet’s derring-do, since it happend last August. When fire swept through Branson’s private island residence during a family visit, Winslet was the one to literally carry Branson’s grandmother out of the burning house. Said Branson at the time:

My mum is 90 and can walk, but it was more just to speed the process up than anything else. But anyway, she was great. She swept her up into her arms and got them out of the house as fast as possible.

Winslet’s ticket entitles her to a trip on Virgin Galactic’s spacecraft, a sub-orbital spacecraft that offers the experience of weightlessness and a view of the curvature of the earth from 60 miles above the surface. She joins the waiting list of passengers for the eight person craft alongside Tom Hanks, Stephen Hawking, Brad Pitt, and Angelina Jolie. With a price tag of around $200k, nobody but celebrities and the infamous rich are likely to be taking the trip anytime soon, but such is the prevailing theory behind offering space tourism for such prices: they reflect the difficulty of putting the trip together with existing technology. Profits are invested in research, and eventually the price will go down, while interest in the service remains high because of its association with celebrity. In the end, we get cheaper, more attainable space travel. At least, we can hope.

See you then, Space Cowboy.