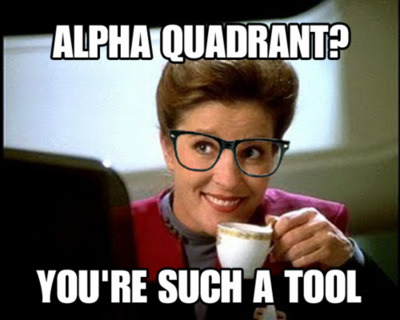 The identity of the best captain to ever helm the Enterprise in a Star Trek show is one of the most contentious in the fandom, and certainly the actors who play those five captains have been known to dabble in the controversy from time to time. But Kate Mulgrew, the only female captain of the franchise, may have just shown us that she has the biggest… ah… warp cores.

In an interview with Splitsider, Mulgrew was asked to verify whether she’d ever claimed there were only two real Star Trek captains.

No, this is gonna go viral.

Well, there are only two captains who were lost in space who did seven years, okay? Deep Space Nine was a space station. Shatner only did three seasons. [Scott] Bakula was cancelled after four.

Journalist: Avery Brooks was only a commander.

That’s what I’m saying, it was a space station. He wasn’t in space, lost in space. Patrick Stewart and I – Picard and Janeway – were the only two intrepid, lost-in-space captains. I really think that’s true, right?

[Everyone raises their hands, intimidated].

Seems like a statement made at least partly jest, or as a jesting boast, and yes, from a strict standpoint, Picard and Janeway were the only characters with the rank of captain whose shows stuck around for more than four seasons. But while I’ll be the first to admit that I don’t really have a dog in the fight of “who is the best Star Trek captain,” and enjoy the original series in the same way I enjoy Silver Age comics (primarily by laughing at them), surely being the first (in real world chronology, Enterprise fans) captain of the Enterprise counts for something?

Wait, is this just the first salvo in an epically awkward inter-celebrity feud like William Shatner had with Carrie Fisher last year?

In that case I’m in favor.