Jupiter's Central Core May be Liquifying and Dissolving, Jupiter May Have Been Bigger Once Upon a Time 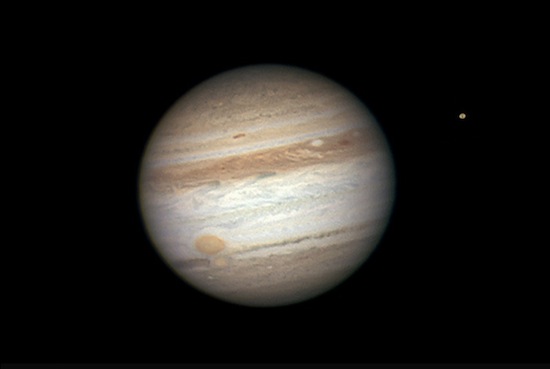 Recently, planetary scientists at University of California, Berkeley, Hugh Wilson and Burkhard Militzer, performed an experiment wherein they dipped the material that helps make up Jupiter’s core, magnesium oxide, into a hydrogen-helium fluid, which is at the heart of the planet. It turns out the magnesium oxide actually has a high solubility, which means Jupiter’s rock could very well be liquifying, shrinking over time, which in turn suggests that Jupiter was even bigger at one point in time than it is now.

That’s not all for poor Jupiter; Wilson and Militzer also calculated that the ice at Jupiter’s core is also dissolving, so the gas giant potentially has two core components of its physical existence slowly withering away. Fellow scientists agree that this research into Jupiter’s potentially dissolving core would provide great insight into how the planet was composed at genesis, which in turn would be important because it would dictate how other, even bigger, gas giants around the universe may have once formed and shrank. The bigger the gas giant’s core, the faster it would dissolve, in theory, which would be that certain planets may exist that actually no longer have a core, which would be, in scientific terms, bonkers.

The conditions on Jupiter can’t actually be replicated in puny Earth labs, but in theory, the experiment holds up, so we probably won’t know for sure until someone stops being lazy and goes over to Jupiter to let us know.