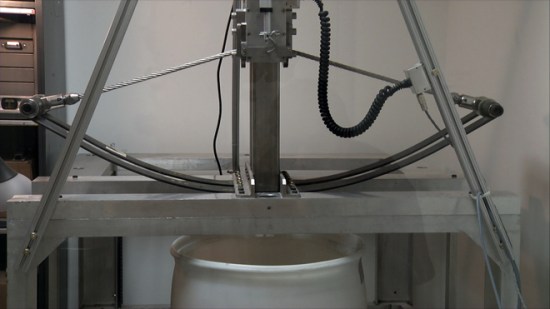 In hopes of making it easier for future space missions to collect samples from asteroids and comets, NASA is working on a crazy space harpoon that will help make that happen. The issue with collecting samples from asteroids and comets aside from the fact that they are both moving fast and far away from Earth, is that they don’t command much gravity. This makes traditional approaches like the scoop or the shovel pretty much useless because they’ll push you right off the surface. An explosive powered space harpoon, on the other hand, can get the job done.

The current proof-of-concept device lives at the Goddard lab, and takes the form of a 6-foot long crossbow with a steel cable for a string. When this baby fires, it can generate a force of about 1,000 pounds and penetrate a 250-liter drum of dirt. The final product will use explosives, but the testing ballista will be used to gauge the force that’s needed for various levels of penetration. On the crossbow-versus-explosives front, I must say that I’m torn as to which is cooler.

NASA already has a mission set up to retrieve some asteroid dust, Osiris-Rex, but it will only yield surface material. The perfection of this harpoon technology will make getting useful, interior samples much, much more plausible. As for now, there is still work to be done on the proof-of-concept crossbow, but once it’s finished, the engineers will apply for funding of the space harpoon proper and start working with explosives. Here’s to hoping space research always remains this cool.