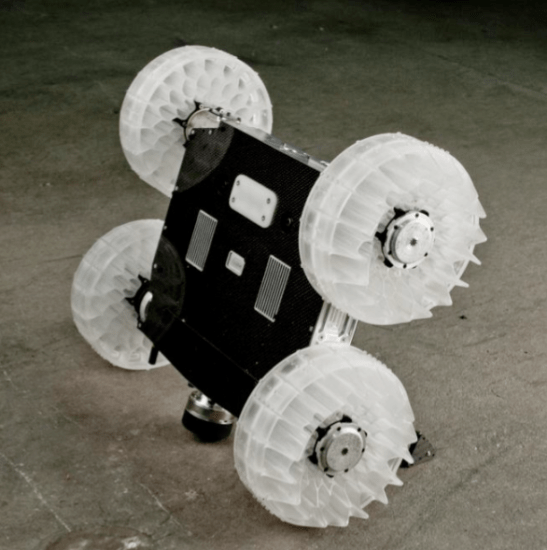 Boston Dynamics, the robot-building company that brought you BigDog and PetMan, is showing off another DARPA-funded robot project called Sand Flea. While Sand Flea normally just tools around close to the ground like your standard remote control car, when it meets an obstacle it rears back and fires a piston against the ground. This shoots Sand Flea some 30 feet into the air, landing safely on the other side. Who needs stairs when you can just launch over ’em?

The idea is that this little guy will be able to navigate complex urban terrain, sending back video to soldiers while it jumps around. This includes while Sand Flea is in midair, which is a bit tricky. However, according to IEEE Spectrum, a wheeled jumping robot has been in development since at least 2009 by Boston Dynamics, so they probably have some idea how to tackle the issue of sending steady, usable, mid-air video.

One thing I find appealing about Sand Flea is the simplicity of its design. The oversized wheels appear to not only help Sand Flea land safely, but also look like they could hold their own against loose rubble and other debris it might encounter. The jumping piston is powered by pressurized CO2, giving it 25 good jumps before it needs to be restocked. Taken altogether it seems rugged enough, and simple enough, to be a worthy little scout.

While BigDog and other robot projects from Boston Dynamics is developing for the military are amazing, most of them don’t appear ready for use any time soon. Not so with Sand Flea. This is definitely a project to keep your eye on.