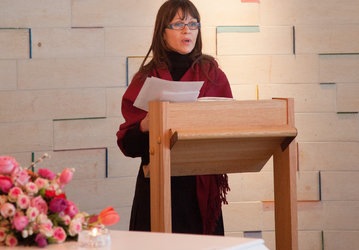 Artist Laura Anderson Barbata stands beside the coffin of Julia Pastrana, a nearly one hundred and eighty year old woman whose husband exhibited her body as a sideshow attraction even after her death at the age of twenty six from complications in childbirth. Barbata’s eight year campaign to rescue Pastrana’s mummified body from basement of the Institute of Forensic Medicine at the University of Oslo came to an end: her remains were given a dignified burial near her birthplace in Mexico just this Tuesday.

Pastrana was born in 1834, suffering from two diseases that were undiagnosable at the time and still rare today, gingival hyperplasia, which causes thickened teeth and gums and in her case, two rows of teeth; and hypertrichosis lanuginosa, a disorder that causes abnormal hair growth. At the age of twenty she was sold to a circus, eventually marrying a man who exhibited her as the “Bearded and Hairy Lady” and “The Bear Woman.” Her notoriety led her to be examined by numerous scientists of the age, who were interested in proving and disproving all kinds of awful hypotheses like whether she was actually human, if one of her parents had been an Orangutan, or to see if she was of African or American Indian descent because… because gross, disgusting racism. And before you take a sigh of relief that at least nobody thinks that ugliness and inhumanity correlates with dark skin any more, and there certainly aren’t a lot of people who’d become invested or interested in scientific proof of the idea, well, don’t.

After she and their child died in 1860, her husband had their bodies mummified and exhibited them alongside his new wife, another woman of similar appearance that he’d found in Russia. After his death, their remains continued to be exhibited up until the 1970s. In 1976 they were stolen. Pastrana’s body was recovered by Norweigan police and eventually positively identified as hers in 1990. In 1994 the Norway Senate suggested that her body be buried instead of kept, but the Minister of Sciences decided to keep it for research. In 2003, after helping her sister present a play about the life of Pastrana, Laura Anderson Barbata began her quest to have the body released and buried in Mexico.

Petitions to the University as well as Norway’s National Committee for the Evaluation of Research on Human Remains, placing an obituary for Pastrana in an Oslo newspaper, arranging for a mass to be said for her came and went before Mario López Valdez, governor of Sinaloa, Pastrana’s birthplace, joined the petition and enlisted Mexico’s ambassador to Denmark, Norway and Iceland to act as an intermediary with the university. This was the impetus the school needed to recognize Barbata as some one who would be held accountable for Pastrana’s remains, and not merely “someone who would ask for them.”

“I felt she deserved the right to regain her dignity and her place in history, and in the world’s memory,” Said Barbata, “I hoped to help change her position as a victim to one where she can be seen in her entirety and complexity.”

(picture and story via The New York Times.)