Judas Fish Could Help Curb Asian Carp in Minnesota, But First We’d Have to Figure Out How to Sterilize Them 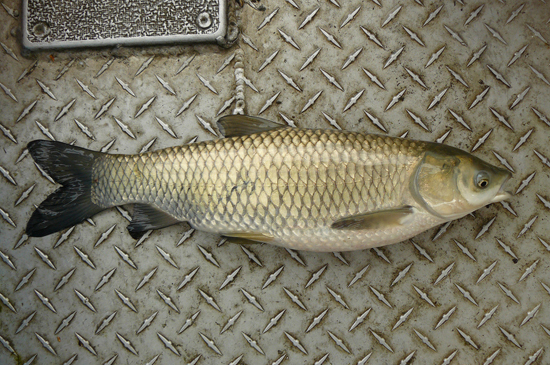 Invasive species are, well, invasive. The label’s given to those critters that didn’t originate from a given area but have moved in and are destroying the habitat for other species. Generally speaking, they upset the somewhat delicate cycle that’s already in place. Asian carp is one example of an invasive species in Minnesota, though they don’t appear to be widespread yet. Peter Sorensen, director of the Minnesota Aquatic Invasive Species Research Center, thinks that “Judas” fish could be used to track down any populations and remove them. First, we’d have to figure out how to sterilize them, though.

The basic plan would be to release a single Asian carp — big-head, silver, or grass — with a radio transmitter. The carp would then eventually end up with the rest of their kind, as they congregate in the winter, and could be grabbed in one fell swoop. There aren’t any known groups of the fish in Minnesota, but there’s been evidence to suggest there are at least a few.

This would be a kind of preventative measure to stop the Asian carp from becoming any more of a menace. These kind of “Judas” programs — where one animal is used to basically betray the rest — have been successful before, but Sorensen notes that we’d have to figure out how to sterilize Asian carp before anything of the sort:

“First we’d have to figure out how to sterilize them,” he said. “You wouldn’t want to release fertile animals.” Common carp implanted with transmitters and released don’t have to be sterilized because there already are so many in the lake.

“There’s been some research on sterilizing fish, so it’s doable, but not a lot of effort has been put into it,” Sorensen said. “Until now, no one had a good reason to sterilize fish.”

So, sterilizing Asian carp is a thing science should be working on. Let that sink in a bit.

(via Phys.Org, image via michiganseagrant)