Joss Whedon Is “Torn” Over Whether to Take on Avengers 2 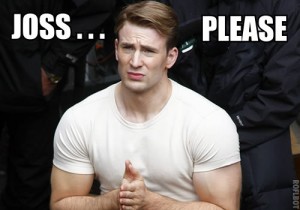 If there’s one thing that we’ve learned from the production of The Avengers, it’s that Joss Whedon is a superlatively busy guy. He’s got four movies out this year, only two of which have yet to be released, and one of them is a Shakespearean play filmed by Joss and a bunch of actor friends over a weekend at his house. And that’s just The Avengers, heyoooo –

Anyway, lets move on and not dwell on how that joke didn’t actually make any sense. The Los Angeles Times sat down with Whedon before The Avengers even opened to ask him about its themes, and the odds of him coming back for a sequel, and unfortunately for our hopes and dreams, he displayed some pretty classic artistic integrity and said he wasn’t sure yet.

You know, I’m very torn. It’s an enormous amount of work telling what is ultimately somebody else’s story, even though I feel like I did get to put myself into it. But at the same time, I have a bunch of ideas, and they all seem really cool.

Joss. Don’t tease us like this. We respect, and even venerate, your concerns as a creator, and the fact that you clearly don’t give a crap about feeding the Hollywood sequel machine. But come onnnnnnnnnnnnnn, you’ll have plenty of intervening time to do Wastelanders with Warren Ellis which I know you postponed in order to take The Avengers and we’re going to love the heck out of it. And in the mean time, you can keep reminding Marvel that you want at least one more female character to play around with for Avengers 2: They Have a Tower Now and Also Thanos.

Joss, we want to see your “bunch of ideas.” Please.

(via The Los Angeles Times.)