Was The Joker Mentioned In The Dark Knight Rises? | The Mary Sue

Was The Joker Mentioned In The Dark Knight Rises? 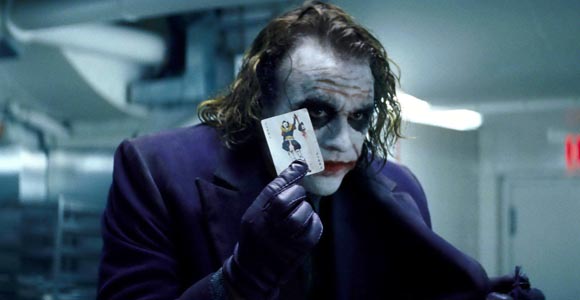 We may never know for sure if director Christopher Nolan would have utilized the Joker in The Dark Knight Rises had actor Heath Ledger not passed away but we can certainly wonder what it would have been like. Did you notice any reference to the Clown Prince of Crime in TDKR? There’s an interesting tidbit you might have missed.

Ok, if you’ve seen TDKR, you know the Joker isn’t even mentioned in passing but that doesn’t mean the character was ignored entirely by the creators. In The Dark Knight Rises: The Official Novelization, author Greg Cox gives some information on the character’s whereabouts.

Now that the Dent Act had made it all but impossible for the city’s criminals to cop an insanity plea, it (Blackgate Prison) had replaced Arkham Asylum as a preferred location for imprisoning both convicted and suspected felons. The worst of the worst were sent here, except for the Joker, who, rumor had it, was locked away as Arkham’s sole remaining inmate. Or perhaps he had escaped. Nobody was really sure. Not even Selina.

Now, you can take that with a grain of salt if you wish since we don’t have a copy of the novelization to confirm it and it was written out by a user on the IMDB message boards but it’s interesting to think about. [EDIT: MTV now has a picture of this exact passage so we know it’s at least real.] We also don’t know at this point if the novelization was based on any original script drafts, if Nolan approved of it at all, or if the writer simply took his own path for the sake of art and entertainment.

What we do know is Nolan had previously done interviews in which he stated they would not be addressing the Joker at all in TKDR. “That is something I felt very strongly about in terms of my relationship with Heath and the experience I went through with him on The Dark Knight, he said. “I didn’t want to in any way try and account for a real-life tragedy. That seemed inappropriate to me. We just have a new set of characters and a continuation of Bruce Wayne’s story. Not involving The Joker.”

Would you have liked to see some mention of the Joker in TDKR or were you fine with them ignoring the character and moving on with the story?