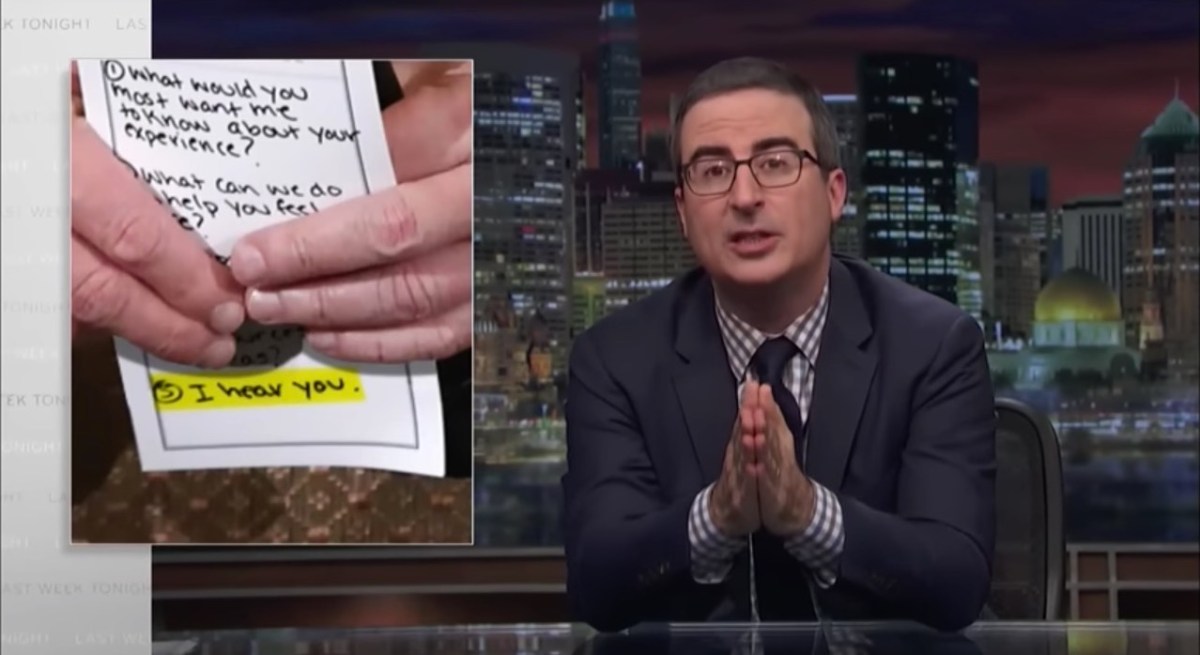 John Oliver’s running for office, but not the way you keep begging him to in the comment section. Yesterday night’s Last Week Tonight was all about Trump’s continued attempts to perform empathy, Donald Trump Jr.’s visit to India, and finally, the current state of Italy as the country holds an election for a new prime minister.

The host began the episode by celebrating his coal victory case, gigantic squirrel with “Eat Shit Bob” sign included. Then, Oliver continued his coverage of the gun control conversation that has returned with the Parkland shooting—specifically Trump’s proposed solution of arming teachers. The show included a clip from a teacher explaining why they don’t want guns in a voice Oliver described as the “patient exasperated tone of a teacher explaining something to the dumbest student in her class”. (Also, it’s fewer guns, not less guns.)

The host also showed a clip of Trump in the White House asking those present whether they agreed with him on the idea, only to be vastly outvoted with strong oppositions. ‘That is Donald Trump in a nutshell,” says Oliver, “proposing a terrible idea in a tone-deaf way, then refusing to acknowledge he just lost a popular vote.”

The main story of the day was the upcoming Italian election for prime minister, which the host explains is especially troubling considering a recent rise in fascism. Fake news along with candidates that speak in dangerous ways about immigration and vaccine skepticism are gaining support, and every fact Oliver brings up about Luigi Di Maio or Matteo Salvini is increasingly alarming.

And yeah, Trump comes up too, to which the host says, “Oh sorry, you thought Trump wouldn’t pop up in this story? Think again. He truly is the Forrest Gump of human misery.”

So what does Last Week Tonight decide to do? They’re going to pull an Air Bud. “We asked half a dozen Italian legal experts, and while they told me I couldn’t run for prime minister of Italy, they also admitted there is no explicit provision in the Italian constitution that says non-citizens can’t run for PM,” he explains, “so as far as I’m concerned….we have ourselves an air bud scenario.  Remember, the rules of basketball did not explicitly say he could not play. Next thing you know, the dog’s dunking. Well, I am that dog, Italy. So alley-oop motherfuckers.”

“Incredibly, I am far from your worst option,” Oliver points out as he appeals to the Italian public with lambs, a game show appearance, and a volcano.