UPDATE: Rep. John Lewis Celebrated MLK Weekend By Getting in Some #GoodTrouble

And Lots of Love for His Graphic Novels 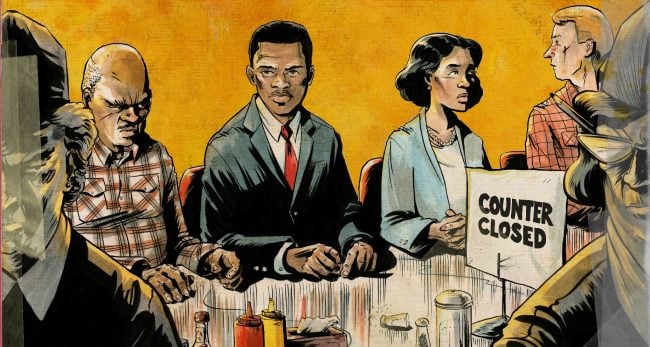 UPDATE: io9 reports that both the completed March trilogy and Lewis’ memoir have since sold so many copies that they are temporarily out of stock at Amazon. (Some individual books of March are still available, though!) The books are also currently listed as the #1 and #3 bestsellers on Amazon, respectively. That’s some well-deserved support for Representative Lewis.

After testifying against the nomination of Jeff Sessions, Representative John Lewis–civil rights activist, Presidential Medal of Freedom recipient, and only sitting member of Congress to write a graphic novel–is continuing to resist. On Friday, he announced that he would not be attending the inauguration of Donald Trump.

Lewis said that he did not view Trump as a “legitimate president.” He said, “I think there was a conspiracy on the part of Russians and others to help him get elected. That’s not right, that’s not fair, that’s not the open democratic process.”

“You cannot be at home with something that you feel that is wrong,” he added.

Trump, unsurprisingly, did not respond well.

Congressman John Lewis should spend more time on fixing and helping his district, which is in horrible shape and falling apart (not to……

mention crime infested) rather than falsely complaining about the election results. All talk, talk, talk – no action or results. Sad!

The irony and all-around grossness of calling a man who was arrested and beaten during the civil rights movement “all talk…no action” on Martin Luther King, Jr. weekend was not lost on the internet. Twitter broke out with support for Lewis under the hashtag #JohnLewisAppreciation. Users also promoted the widely celebrated and decorated March series of graphic novels, which are written by Lewis and Andrew Aydin, and illustrated and lettered by Nate Powell. March: Book One was the first graphic novel to win a Robert F. Kennedy Award; Book Two won an Eisner Award; and Book Three took home the National Book Award.

Lewis likes to refer to his activism and civil disobedience as “good trouble.” In an interview with CNN about the National Center for Civil and Human Rights, he explained the meaning of this phrase. While he acknowledges that his parents told him, “Don’t get in the way, don’t get in trouble,” he said that “Dr. King and Rosa Parks inspired me to get in trouble. Good trouble…necessary trouble. To make our country and make our world a better place.”

While Lewis is a politician, and like all politicians, can support some less progressive policies, I found his courage and his calls to “good trouble” inspiring this weekend–and a great reminder of why Martin Luther King, Jr. Day is a holiday in the first place.

(Via The Daily Dot and Twitter, image via Top Shelf Productions)