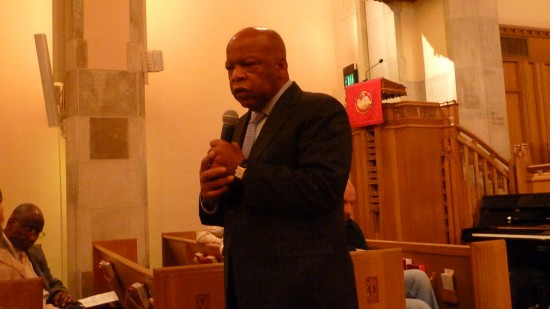 In what must be one of the coolest — and most welcome — instances of political-geek news, Congressman John Lewis (D-GA) has signed on to write a graphic novel depicting his decades of work during the Civil Rights Movement, which will be produced by Top Shelf Productions. He will be the first sitting member of Congress to write a graphic novel, which makes this even more excellent. If there was any way to reach various audiences with your story, this is certainly an effective, exciting move.

As of posting, no artist has been chosen for this project (they are currently looking), which will carry the title “March” and will be a collaboration between Congressman Lewis and his aide Andrew Aydin. Lewis promises not a story of struggle, but a story of “involvement.”

“It is my hope,” said Congressman Lewis, “that this work will be meaningful and helpful to future generations to give many people here in America and around the world the urge, the desire, to seek, to build, their own world, their own future.”

A meditation in the modern age on the distance traveled, both as a nation and as a people, since the days of Jim Crow and segregation, March tells the first hand account of John Lewis’ lifelong struggle for civil and human rights.

Congressman Lewis, before being elected to Georgia’s 5th District in 1986, was an active and high-profile participant in the Civil Rights Movement of the late 1950s and 1960s. He organized sit-ins at segregated dining establishments, challenging Jim Crow laws of the South and getting arrested and beaten for his troubles. He was a major player in the fight, and this is sure to be a truly insightful, visually-rich project.