When You're Too Shady for John Bolton, It's Time to Reexamine Your Choices | The Mary Sue

When You’re Too Shady for John Bolton, It’s Time to Reexamine Your Life Choices 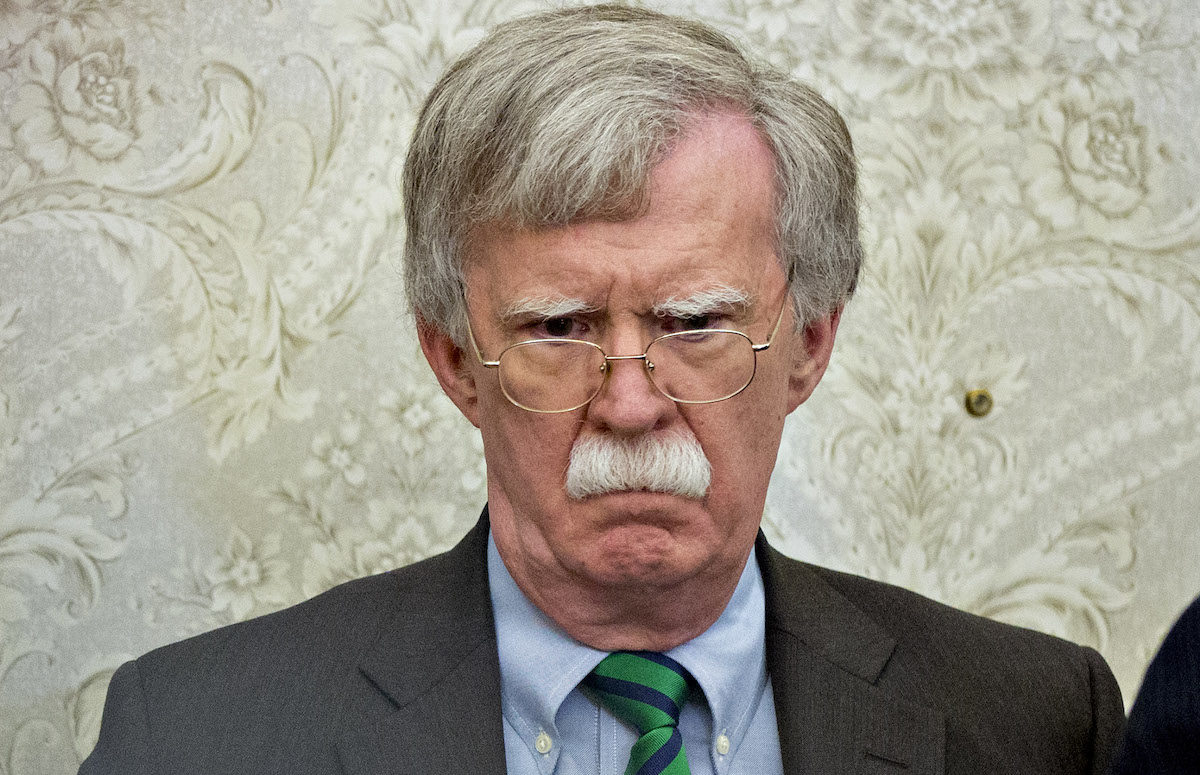 Donald Trump’s former National Security Advisor, John Bolton, hasn’t yet been called to give a deposition to Congress for their impeachment inquiry. But we’re learning a lot about his thoughts in the meantime.

On Monday, former White House Russia expert Fiona Hill gave her testimony to Congress, which included a lot of information about Bolton. By her account (according to the Washington Post and the New York Times), Bolton was “furious” over the Ukraine scheme being driven by Giuliani and other Trump associates, including Acting White House Chief of Staff Mick Mulvaney and European Union Ambassador Gordon Sondland, who was supposed to given his own deposition last week before being blocked from doing so by Trump. (He is set to appear in front of Congress this week.)

Hill says that in one meeting, Sondland specifically brought up “investigations that were dropped that need to be started up again”—which apparently everyone knew was a reference to Joe and Hunter Biden—and Bolton went “ballistic.”

It sounds like Bolton was desperate to distance himself from whatever “drug deal” (his words) Giuliani and others were “cooking up.” He said Giuliani was akin to a “hand grenade who’s going to blow everybody up.” Which definitely doesn’t sound inaccurate, but Giuliani still didn’t take kindly to it.

.@RudyGiuliani on Bolton calling him a “hand grenade.” RG: “I’m very disappointed that his bitterness drives him to attack a friend falsely…It’s really ironic that John Bolton is calling anyone else a hand grenade. When John is described by many as an atomic bomb . “

Some people are starting to call Bolton a hero, which is definitely going too far. (I’m getting James Comey flashbacks.) He didn’t instruct Hill to testify, and while he did reportedly tell her to bring their concerns about the Ukraine calls and deals to the White House lawyers, he didn’t report to the FBI or anyone else who was likely to actually do something about those concerns. He also stayed in his position until Trump fired him by tweet. He’s not exactly an ally.

It’s going to be extremely fucking weird when John Bolton brings down Donald Trump and becomes a hero to liberals.

White privilege is John Bolton playing a major role in the destabilization of other countries and deaths of thousands, but he might be a whistleblower now so he’s being called a “hero” and “courageous”.

Still, the fact that John Bolton is anything resembling a Democratic asset right now is absolutely ridiculous. The man is a nationalist neocon war hawk. He effectively destroyed the National Security Council in order to exploit Trump’s inexperience to allow him to pursue his own foreign policy agenda. He’s done immense, lasting damage to the country.

And yet somehow, here we are.

Imagine being too shady for John Bolton, a man who looks like a time traveler sent back to help save the confederacy pic.twitter.com/KMiM5wjHRu

Imagine being so terrible that John Bolton is blowing the whistle on your crimes.

Trump-world and his political appointees, are such lackeys and suck-ups wiling to do everything and anything to stay on Trump’s good side, that John Bolton actually became the moral compass of that sorry bunch.

Boy when you’re too dishonest, corrupt and evil for John Bolton you should either pack it in or try to conquer Gotham. https://t.co/kMEBNwWf9d

John Bolton complaining about the unethical deals, traitorous policies, and disgusting political subterfuge being conducted in the palace behind his back is the plot development Season 3 needed.