John Barrowman Really Wants to Return to Doctor Who 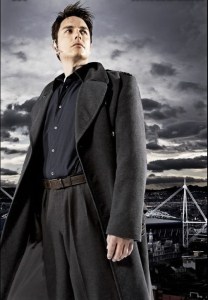 “It’s the 50th anniversary coming up of Doctor Who and Jack is an integral part to this story and, if I’m going to be a little self-absorbed, I would hope he would be involved, it would be a shame if he wasn’t … But it’s a decision left up to the BBC and the drama department … So like I’ve said to all the fans, you need to write to them if you want it to happen because I’ve never been asked. I know Russell [T. Davies] thinks it might be a nice idea as did [executive producer] Steven Moffat but who knows?” — John Barrowman, unofficially kicking off the “Get Captain Jack Harkness Back on Doctor Who” campaign.

Until such a return is made, we have yet to see Captain Jack hanging out with Matt Smith‘s 11th Doctor, but Barrowman has already said that he’s a “very good Doctor.” It’s up to us, Whovians! Let’s get the Beeb to Bring Back Cap!