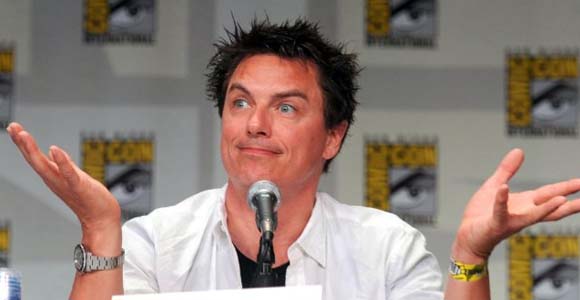 Lots of folks didn’t mind admitting they weren’t really all that bothered by the announcement of actor Matt Smith leaving Doctor Who. It seems we can now add Arrow actor, and Who-favorite, John Barrowman to that list.

In an interview with MTV Geek, Barrowman commented on the recent Doctor Who happenings:

“I don’t know what the reaction is people want me to have but as an actor, it’s no big deal; it is a job for him [Smith],” he said. “I wasn’t devastated, I wasn’t gutted, but I am excited to see who the new Doctor will be.”

“I know ‘Doctor Who’ so well and know the Doctors are going to change, so I’m not devastated he’s going — but it is sad for the fans.”

“When David [Tennant] left, everyone was like, ‘Oh, it’s not going to be the same’ but it’s going to be OK,” said Barrowman. “You’ll just join along and be a part of it, as you always are.”

His comments make sense when you consider Barrowman never got a chance to play his Captain Jack Harkness alongside Smith’s Doctor. Most of us, Barrowman included, were disappointed to learn he wouldn’t play a role in the 50th anniversary episode.

Meanwhile, there was a rumor going around yesterday the BBC would make their big announcement this weekend as to who would be the next to step into the shoes of The Doctor. Then the BBC actually made an announcement…to say they wouldn’t be announcing anything.

We can confirm there is no #DoctorWho announcement planned for today.

Tomorrow then, maybe? Though producer Ed Stradling tweeted this note, “Steven Moffat says this morning ‘I haven’t a clue who it is, we’ve barely started.’ So no #doctorwho announcement this evening I fear!”

But we take that with a grain of salt, not just because Wil Wheaton claimed to know who the 12th Doctor is, but because we don’t think they’d let Smith make his departure announcement without already having someone lined up to replace him. Anything is possible, I suppose. This is Doctor Who.