Jennifer Lawrence Has Every Right to Be Upset About Spoilers, The Rest of You… Not so Much

It's the latest installment of our ongoing series "Glen Has Strong Feelings About Spoilers." 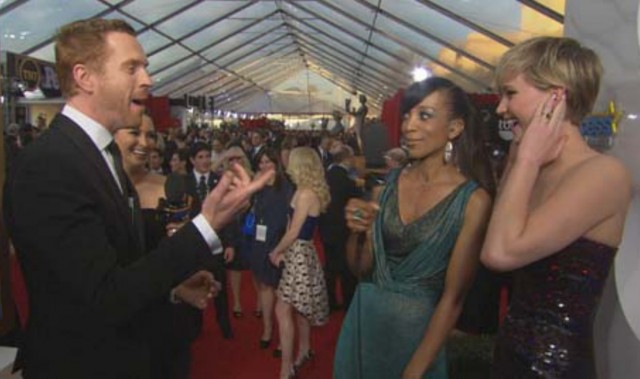 First, at the request of the rest of Team Geekosystem, I will warn you that here be spoilers. At the SAG awards, some Access Hollywood reporters spoiled season three of Homeland for Jennifer Lawrence live on air because they’re horrible monsters. Lawrence gets to be upset. You do not.

Here’s the video which has spoilers about season three because that’s the whole point of this even being a thing we’re talking about right now. Jennifer Lawrence meets Homeland star Damian Lewis and has season three of the show spoiled for her by the reporters.

When the reporters both mention that Lewis gets killed off in season three, Lawrence gets “past mad,” and she should. She started the interview by saying she’s only seen the first two seasons of the show, loved it, and was anxiously waiting for DVDs of season three. She should be mad.

Other people on the Internet who also haven’t seen Homeland season three seem to be mad that the reporters in question spoiled it for them as well, but it’s not the same thing. Here’s why.

Lawrence told the reporters she has only seen the first two seasons as a warning. She made it clear she didn’t see season three and doesn’t want to know about season three. The reporters spoiled it knowing that they were spoiling it. Viewers at home didn’t give that warning to the reporter because that’s not how televisions work. The reporters should have respected Lawrence’s implied request for season three silence, but didn’t. That makes them, as Lawrence called them, monsters.

The fact that the reporters spoiled it for anyone else isn’t their fault. They’re entertainment reporters. It’s their job to talk about entertainment, not protect people who can’t be bothered to watch something in a timely manner from spoilers (unless specifically asked.) If Lawrence hadn’t said anything about how much of the show she had seen up to that point and the reporter asked about Lewis’ death on the show and Lawrence reacted the same way, I’d be calling her a monster instead.