Let’s Settle This: What Constitutes a “Spoiler,” and When is It Okay to Let One Out?

We need to have a chat about spoilers. What they are, when we can talk about them, and why Rollin is completely wrong about them. 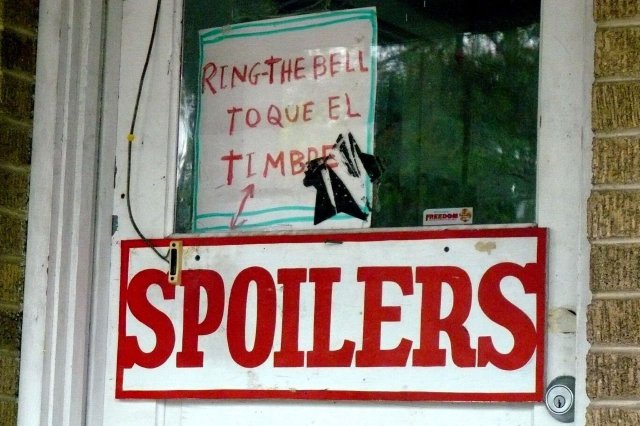 Internet, we need to have a serious talk about spoilers. It’s gotten out of hand — both hands. People are simultaneously being too sensitive about minor details, but also printing T-shirts ruining the endings of children’s books. It’s a divisive issue that comes up a lot here at the Geekosystem office, and I think it’s high time we sat down and hashed this thing out. What’s a spoiler, and when is it okay to let one out? Fair warning, I’ll be using a few classic spoilers as examples, like The Sixth Sense and The Usual Suspects.

We’re trying something a little different here today. We’d like to open up a discussion in the comments section to hopefully come to some mutually agreed upon idea of what counts as a spoiler, and when it’s okay to talk about them. This has a been a huge point of contention at Geekosystem — particularly between myself and our managing editor Rollin Bishop. He tends to be precious about just any detail of a piece of media, while I’m more cavalier about letting information out into the world. We also hugely disagree on the shelf-life of something counting as a spoiler. [Ed. note: Glen’s a monster. – R]

To get us started, I’ll lay out my argument about what I think is and isn’t a spoiler, and why it’s your own fault if something gets spoiled for you in most cases.

So what counts as a spoiler? Finding out that Bruce Willis’ character in The Sixth Sense is dead for most of the movie is probably the most cited example, and it should be. It’s a perfect spoiler. Finding out that Willis is dead ruins the movie. Sixth Sense is not a particularly good film, but it’s ending does a great job of tricking you into forgetting how boring the rest of the movie was.

That moment of revelation is the only thing the movie really has going for it, so if you tell someone Willis is dead you’ve spoiled the entire movie for them. I think any reasonable person would agree that counts as a spoiler, but not everyone agrees exactly what a spoiler is.

A few weeks ago we posted a trailer for Iron Man 3 that showed Pepper Pots in one of Iron Man’s suits, and people got upset — both at us, and at Marvel for putting that out in a trailer. Here’s the thing — that’s not a spoiler. Pepper suiting up is not integral to the plot of Iron Man 3. Knowing that at some point you’ll see her in armor doesn’t ruin your enjoyment of the movie. Sure, it was a cool moment, but if it got edited out, the movie would be exactly the same, just a few seconds shorter.

Another recent example of something we covered that got the Internet upset was when the BBC announced that Matt Smith was leaving Doctor Who and would be regenerating in this year’s Christmas special. That is a spoiler. The Doctor regenerating is a HUGE plot point in Doctor Who, but it’s the BBC’s detail to spoil as they see fit.

It would be different if a blogger got an early look at the script and blabbed about the regeneration, but Doctor Who is the BBC’s party and they’ll spoil it if they want to. It benefits them to let people know the regeneration is happening because more people will probably watch the episode because of it. Besides, it gives fans time to emotionally prepare themselves. I’m still trying to get over “The End of Time.”

The late Roger Ebert laid out a solid argument against reviewers spoiling movies in their reviews back in 2005, and called for warnings of spoilers. I agree with him. As someone who has the occasional opportunity to see something before it’s released to the public, I have a responsibility to not ruin that thing for everyone else by pointing out details that are key to the story. If had been tasked with reviewing The Sixth Sense before it was released, I absolutely would not have mentioned Bruce Willis being dead, but that movie is nearly 14 years old. It’s time to stop being precious about it.

This is where Rollin and I diverge.

At this point, if you still haven’t seen The Sixth Sense that’s fine, but you can’t expect that everyone else in the world is going to not talk about it. Dodging that detail is your job at this point. Rollin’s made the point to me that kids who are born now won’t know that Bruce Willis is dead the whole time. Shouldn’t we preserve it for them?

No. Their parents should.

One of the things I worried about the most when my daughter was born earlier this year was when I should show her The Empire Strikes Back. Also, like, feeding her and stuff, but my wife seems to have that pretty much under control. I get to focus on things like when our baby finds out that Vader is Luke’s father.

I want to protect my daughter from that knowledge until she’s old enough to understand how important of a moment that is in the Star Wars series. I want to sit down with her and show her the movie and see the look on her face, but it’s common knowledge at this point. People talk about it regularly in discussions about Star Wars. It would be bananas of me to expect everyone in the entire world to shut up about Vader being Luke’s dad until I decide to show Empire to my daughter. I’m the one who wants to keep that information from her, so it’s my job to keep it from her. Not everyone else’s.

The other disagreement Rollin and I have when it comes to spoilers is when it’s okay to talk about them. I’ll admit I’m on the extreme end of the spectrum in terms of the shelf-life of a spoiler. In my opinion, if there’s a movie you don’t want to have spoiled for you, people should only give you until the Monday after it’s released before they talk about it freely. For TV shows, you only get the night it airs.

Culture is made to be discussed. If something amazing happens on Doctor Who I want to talk about it with my friends, on Twitter, even on Geekosystem. I’m tired of tiptoeing around details of things I want to talk about because someone waited to see something. I love Doctor Who, but I can’t always watch it on Saturday night, and I have friends on Twitter who live in the U.K. and see it hours before I even have a chance.

I tend to stay off Twitter on Saturdays. Sometimes even longer if I don’t have a chance to see the latest episode until Sunday, or even later sometimes. I’ve come into the office a few times during the past season of the show not having seen the episode only to overhear the ladies of The Mary Sue talking about details of the episode. I pop in my headphones and drown them out. It would be rude of me to tell them what to talk about just because I hadn’t seen the episode yet.

I’ve been looking forward to Man of Steel, but had a busy weekend. I haven’t seen it. The movie made $128 million this weekend. A lot of people saw it. I’m not going to tell them all it’s their responsibility to keep details from me. If I really wanted to see it, I’d have seen it. There’s a great episode* of The Cosby Show in season seven titled “It’s Your Move,” where Elvin, Martin, and Elvin’s friend Walter are trying to avoid finding out the score of a football game they have taped for later. They couldn’t watch the game because they had to help Walter and his wife move.

[*Spoiler Alert: All episodes of The Cosby Show are great.]

The show pulls humor out of how desperately these guys are trying to not find out the score of the game. I’m in the same position. I don’t want to have Man of Steel details spoiled for me, but if it happens it’s my fault for spending the weekend with my wife and daughter instead of watching the movie.

Since I’ve started working here I’ve had to dance around the big reveal in The Usual Suspects because Rollin hasn’t seen it. You know what? Kevin Spacey is Keyser Soze. That movie came out almost 18 years ago. We first started talking about it months ago here in the office. Rollin had his chance to see it, and so did you.

Finally, I think we can all agree it’s a jerk move to get T-shirts printed up spoiling the end that Harry Potter book. I’m not advocating that we go out of our way to spoil things after my admittedly short time frames, just that we be allowed to discuss them freely in what I think is a reasonable amount of time for someone very concerned about spoilers to see them.

And for Pete’s sake, Rollin, watch The Usual Suspects already.