Joseph Gordon-Levitt on Why Sandman Is a Movie, Guillermo del Toro Rumored to Be off Justice League Dark 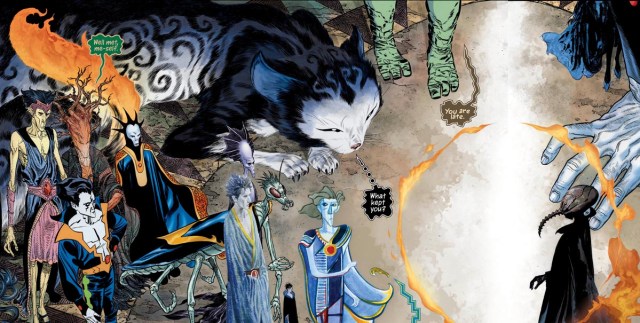 If you were holding out hope for Guillermo del Toro to work with DC Comics superheroes, I’ve got some bad news for you. But Joseph Gordon-Levitt is here to make you feel better by describing an “absolutely mind-blowingly awesome” Sandman movie.

Del Toro is reigning champ of saying yes to every cool project that comes his way. The last we wrote about his perpetual Justice League Dark/Dark Universe (based around magic-users of the DCU) project for Warner Bros. was November of last year. At that point a script was done and being looked over by the studio but The Hollywood Reporter is now saying, “insiders say the filmmaker, who is working on a sequel to Pacific Rim even as he preps his gothic horror movie Crimson Peak, is no longer attached to the project.”

That news comes as part of a larger story about Warner moving all their Vertigo Comics projects (like Sandman) to New Line Cinema. THR reports:

The move is part of a larger reshuffling of the deck between DC Comics and its edgy imprint Vertigo. DC projects, those involving the four-color heroes such as Batman and Wonder Woman and Flash, and are—or could be—part of an interconnected cinematic release, will remain in the Warner fold.

Vertigo titles, which are more creator driven and tend to push the envelope in terms of boundaries and content, will now look to be adapted by New Line.

There are some exceptions. Shazam, which has been in development at New Line with Dwayne Johnson attached to star, remains at New Line.

The Dark project will remain at Warner even though the characters included are from both the Vertigo imprint and DC proper, while Sandman will be one of the ones moving to New Line. In that vein, Gordon-Levitt talked a bit more about the project recently in a Reddit AMA. A fan asked, “Given the large scope and episodic nature of would you say it is best suited for a big screen adaptation, or would a small screen adaptation fit the bill better?” Levitt said:

I think a big screen adaptation is a better idea and here’s why. If you did the episodic version, I think it could very well end up as a not-as-good-version of what is already brilliant in the comics. But by reworking the material into a big movie, Gaiman’s brilliant characters and ideas get to take shape in a way they never have before. Also, I think Sandman deserves to look absolutely mind-blowingly awesome, just on a visual level, and as cinematic as some tv shows are becoming these days, they still can’t compete with big movies visually, just because they can’t afford to.

Ok, I totally feel him on the visual stuff but I still want something that can really get into the depth of the work, rather than just the visuals. And if the film doesn’t do well, we’ll only have around two hours of material rather than say, 10 for a limited series on something like a paid cable network.

When asked if there was anything about the adaptation of Neil Gaiman’s work he could share he responded with:

Yeah, there’s tons of little brilliant moments throughout the series, and we certainly can’t incorporate all of them. We are using a whole bunch of specifics straight from the comics, but of course, we’re also having to do a certain amount of invention, and in between that, there’s tons of re-appropriating, re-contextualizing, combining, consolidating, and all manner of things that literalists might not like. But what we try to be completely faithful about is the overall sentiment: that Dreams and Stories and Magic are actually all the same thing, and that they’re real, and that they’re powerful.

How are you feeling about this one?