You Can Buy Jesse Pinkman’s Tercel, Live Out All Your Wildest Breaking Bad Fantasies 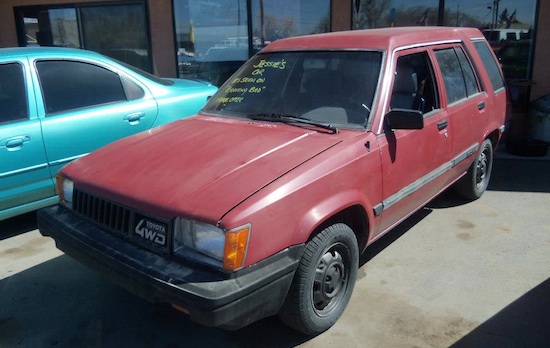 Are you in the market for 1984 Toyota Tercel featuring four wheel drive and all four of those wheels still on the car? No? Well, what if I told you the car you can buy was the one time ride of Breaking Bad‘s Jesse Pinkman. Would that have you singing a different tune? Thought so. Keep reading to find out how you can do the impossible–be the envy of your friends by purchasing a Tercel.

The show’s producers had been leasing the Tercel from an Albequerque-area car dealer, Mike Faris. As the show winds down, the car is returning from whence it came, and is currently on display in Faris’ lot, where it will stay until later this summer, when Faris plans to auction off the car following the show’s final episode. This, plan, of course, assumes the ride won’t be stolen by meth heads or rabid Breaking Bad fans in the ensuing months, which seems like kind of a lot to assume.

The car’s market value is $500, but you can expect it to go for a lot more than that at auction, so if Jesse’s Tercel is a must have toy, you might want to start saving your change right now. Over on this end, I’m totally psyched about being able to own a piece of one of the best shows on TV right now, but let’s face it — the Tercel isn’t really it. Now, if anyone knows where I can go to buy the RV that became Walt and Jesse’s home away from home, I’m all ears.