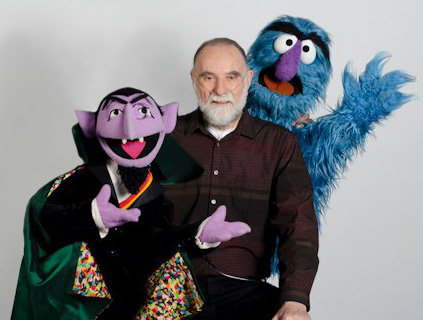 You might not recognize Jerry Nelson‘s name, but you’re probably more familiar with Sesame Street’s the Count, Amazing Mumford and Snuffalupagus, or Statler (half of the heckling duo of Statler and Waldorf), Floyd Pepper (the mustachioed guitar player in the Muppet Show house band), Lew Zealand (that guy who chucks fish), Gobo Fraggle, Robin the Frog, or maybe even Emmet Otter. Though he may never have had roles as iconic to the Muppets as some of his colleagues, his long, long history with the group touches almost everything they’ve ever done. He passed away yesterday after a long period of declining health, at the age of seventy-eight.

And that’s certainly a good enough reason to collect a few videos of his characters and share them below.

“Halfway Down the Stairs” is one of the more famous numbers sung by Robin, with lyrics from a poem by Winnie the Pooh creator A.A. Milne.

You’d think if anybody’d be able to handle the Muppet Show’s resident hecklers, it’d be Milton Berle. (Nelson’s character, Statler, is the one on the right.)

Floyd and the Electric Mayhem sang this number in the Paul Simon episode of the Muppet Show: the only episode where every musical number was from the same artist.

We can’t finish the post without a number from Fraggle Rock, where Nelson played one of the series main characters.

And just so I make sure I’ve done my best to get you to cry, a sequence featuring not one but two of Nelson’s roles: Robin the Frog (as Tiny Tim) and the Ghost of Christmas Present.