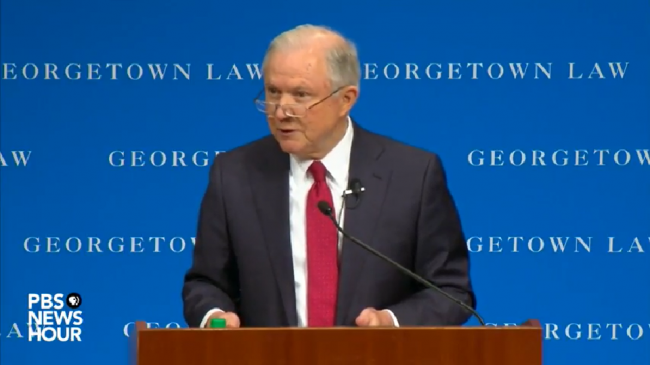 Or, There Were Too Many Hypocrisies in Jeff Session’s “Free Speech” Lecture to Fit in One Headline

Because everything is a joke now, Attorney General Jeff Sessions, a man who is still prosecuting a woman for laughing at him, was somehow invited to the Center for the Constitution at Georgetown Law to lecture on the importance of free speech. And since that wasn’t enough of a farce, around 130 students were reportedly disinvited from the event in order to guarantee him a sympathetic audience – you know, like people who love open debate and the First Amendment do!

Student Lauren Phillips wrote to The Washington Post after more than 130 students received emails on Monday which informed them that they had been sent an initial invitation to the event in error. The students had registered to attend through the official, appropriate channels and previously received confirmation of their registration. However, the Center later claimed that seats for the event would only go to students who’d attended past Center for the Constitution events, or who were enrolled in one of the classes taught by the Center’s director, Randy Barnett.

According to Phillips, school officials also told students that they could only protest Sessions’ speech within a designated “free speech zone” on campus, and that any students who wanted to protest during the speech itself would have to do so without “disrupting” it.

Phillips said the uninvited students “find it extraordinarily hypocritical that AG Sessions would lecture future attorneys about the importance of free speech on campus while actively excluding the wider student body.”

Third-year student Spencer McManus told the Post that he found it quite ironic “that this attorney general is coming to our campus to tell us to exercise our constitutional rights, when he and the president have repeatedly condemned those who have exercised those rights.”

Sessions’ speech itself was pretty much exactly as expected. (If you hate yourself, feel free watch the entire thing at PBS News Hour.) It included whinging about the university as”an echo chamber of political correctness,” a condemnation of Antifa, incredibly out-of-context and inappropriate references to Martin Luther King, Jr., and chuckling at the idea of students needing counseling when a hateful speaker comes to campus.

OH YES, YOU READ THAT RIGHT. Jeff Sessions, whom Coretta Scott King opposed for a 1986 federal judgeship because she believed he would “irreparably damage the work of my husband;” Jeff Sessions, at whose nomination hearing Elizabeth Warren was silenced for reading aloud Coretta Scott King’s opposition to him, USED MARTIN LUTHER KING, JR. IN HIS LECTURE ABOUT HOW LEFT-WING ACTIVISTS ARE RUINING CAMPUS FREE SPEECH. (You can listen in the video at around 16:05.)

Irony is well and truly murdered, everyone.

In his speech, Sessions claimed that “the government does not tell you what to think or what to say,” while serving as part of an administration where the White House Press Secretary and President have both called for black people to be fired for expressing political opinions.

AG Jeff Sessions: “In this great land, the government does not tell you what to think or what to say.” https://t.co/NVjtWi6jKa pic.twitter.com/QpKpXgNNgi

Sessions also called the NFL protests “a big mistake” that is “denigrating the symbols of our nation” and defended Trump’s right to criticize private citizens’ exercise of free speech, because “the President has free speech rights, too.”

He repeated the well-touted right-wing talking point that universities are becoming Stalinist “shelter[s] for fragile egos.”

Attorney General Jeff Sessions: “Freedom of thought and speech on American campuses are under attack” pic.twitter.com/vJmqbzxZ0x

While Sessions obviously has no idea what the exercise of free speech entails in an open and equal society, at least Georgetown’s students and faculty do. Signs, chants, and official faculty statements were launched in opposition to Sessions’ treatment of free speech at this event, as well as his record on racism, immigration, and prosecuting a woman for laughing at him.

Georgetown Law students and faculty take a knee in protest before AG Sessions speech on free speech. Some say they were disinvited pic.twitter.com/JzfghPgUJQ

“We have questions for Jeff Sessions!” pic.twitter.com/AN30g5w7C8

Just outside of Jeff Sessions speech at Georgetown Law. pic.twitter.com/NJGCJalbOf

And so, no thanks to his authoritarian actions or inane ideas, Jeff Sessions’ lecture did at least spark something of an education on free speech. Just not in the way he’d thought.

(Via Slate and The Washington Post; image via screengrab)