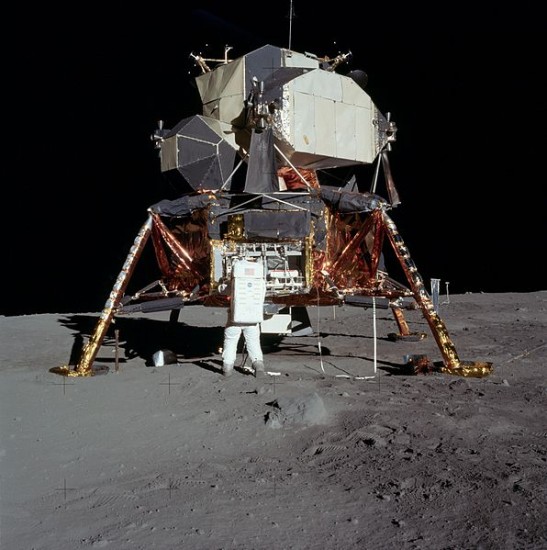 Launching objects into orbit, much less to the Moon, requires a lot of power and huge engines. Of course, those engines can’t make it all the way up there, so we tend to just let them drop, usually into the ocean. Amazon founder and billionaire Jeff Bezos thinks this is a shame, especially when it comes to historic engines like those from the Saturn V rocket that propelled Apollo 11, the first mission to reach the Moon. That being the case, he’s devoted some of his billions of dollars to locating said engines on the floor of the Atlantic, and now he wants to devote a few more to bringing them back up. Updated content follows after the original story.

Interestingly enough, even though the Saturn V’s five rocket engines fell into the ocean 43 years ago, they still technically belong to NASA, so this is really a charity endeavor on Bezos’ part. Far from putting one in his living room or trying to sell one (which he couldn’t), Bezos suggests that, if recovered, at least one of the engines will go on display at the Smithsonian. That being said, he’s also suggested NASA might let him keep one at the Museum of Flight in Amazon’s hometown of Seattle, which would be a nice gesture on NASA’s part I think.

The idea of recovering these engines has been tossed around for over 10 years now, ever since a similar mission recovered the Project Mercury Liberty Bell 7 space capsule. It was pretty easy to guesstimate where the Liberty Bell had fallen, so the Saturn V engines weren’t too hard either. Recently, Bezos has narrowed down the approximate Apollo 11 engine location and found the bad boys 14,000 feet below the surface, though it’s unclear if he used diving cameras or purely surface methods. Either way, they’ve been found, but may not be entirely intact. After all, they’ve been through a lot.

Granted, finding the things was part of the challenge, but only part of it. To make sure these are actually the Apollo 11 engines (other engines would just be ever-so-slightly less cool) someone would have to check the engines’ serial numbers against the NASA records, which could prove slightly difficult —  but not impossible — while they’re on the sea floor. And bringing them up off the sea floor isn’t exactly child’s play either. The engines, if intact, weigh around 9 tons apiece, or in technical terms “really freakin’ heavy.”

For the moment, NASA is aware of Bezos’ designs on the engines, but has yet to engage in any sort of formal talks with him. Hopefully they’ll get around to it, because I can’t see anything they really have to lose by giving him the go ahead. Without Bezos’ intervention, those engines are just going keep sitting down there gathering coral or whatever, and it’s not like he doesn’t have the funds to throw at this pet project. I guess James Cameron and Richard Branson aren’t the only monied celebrities interested in throwing cash at doing stuff in the ocean. Good on you, Bezos. Best of luck.

NASA administrator Charles Bolden announced his support for the recovery of the F-1 engine. From the NASA press release:

“I would like to thank Jeff Bezos for his communication with NASA informing us of his historic find. I salute him and his entire team on this bold venture and wish them all the luck in the world.

“NASA does retain ownership of any artifacts recovered and would likely offer one of the Saturn V F-1 engines to the Smithsonian Institution’s National Air and Space Museum in Washington under long-standing arrangements with the institution as the holder of the national collection of aerospace artifacts.

“If the Smithsonian declines or if a second engine is recovered, we will work to ensure an engine or other artifacts are available for display at the Museum of Flight in Seattle, as Jeff requested in his correspondence with my office. I have directed our staff to begin work to exercise all appropriate authorities to provide a smooth and expeditious disposition of any flight hardware recovered.

“I sincerely hope all continues to go well for Jeff and Blue Origin, and that his team enjoys success and prosperity in every endeavor. All of us at NASA have our fingers crossed for success in his upcoming expedition of exploration and discovery.”