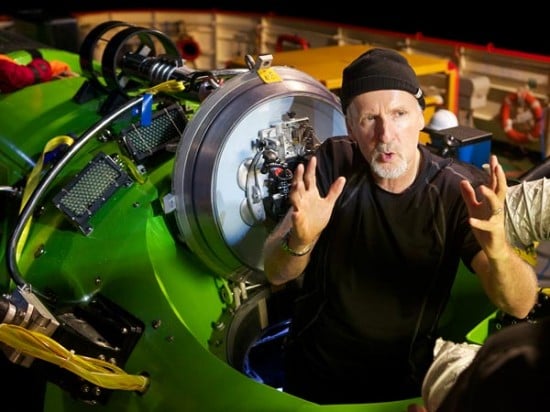 Director James Cameron, who recently attempted a record-breaking dive to the deepest known point in the world’s oceans, has successfully completed his mission, snagging the recording and whole bunch of footage for, you guessed it, a movie. After a two and a half hour descent to, and then a 70 minute ascent from, the Mariana Trench’s Challenger Deep, Cameron — unscathed but just slightly stiff — emerged from his sub’s cramped quarters holding the record for deepest solo dive, and a wealth of samples for scientific study. He may not be able to go to Pandora, but he’s certainly been to the abyss.

Back in 1960, Jacques Piccard and Don Walsh completed this same feat in a bathyscaphe, and while it was just as impressive then as it is now, the amount of information they could bring back was significantly lower. Cameron, on the other hand was armed with an aresenal of high tech gear including 3D cameras, a robotic claw, a sediment sampler, and a “slurp gun” for sucking up bottom-dwelling creatures for study at the surface. Cameron even managed to tweet from the depths, it seems. If so, then truly nothing is impossible.

While the mission was definitely accomplished, it was also cut short. After reaching the bottom, Cameron’s sub started leaking hydraulic fluids which caused a few problems. On top of being plain old terrifying, the leak resulted in a loss of mobility. “I lost a lot of thrusters. I lost the whole starboard side. That’s when I decided to come up. I couldn’t go any further — I was just spinning in a circle,” Cameron told National Geographic.

Despite any technical issues, the dive has still proven to be an impressive one and has shown that Cameron and his sub can handle the journey, at least passably. The samples collected still have yet to be studied, but Cameron doesn’t seem likely to rest on his record-holding laurels just yet. When discussing the mission’s failures, Cameron had this to say: “Next dive. Gotta leave something for the next one.” And it makes sense. Given Cameron’s directing history, it seems very clear that he doesn’t settle for breaking records just once.