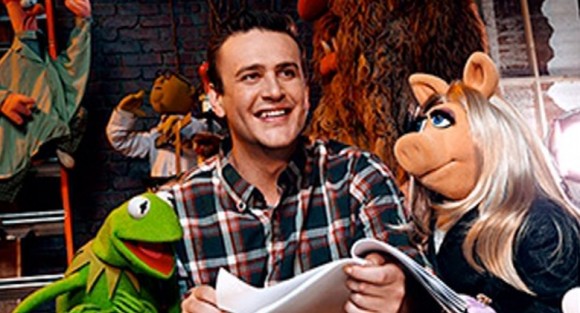 Guys, GUYS: Jason Segel, who wrote and is starring in The Muppets which is opening next month (whoa!), is set to host Saturday Night Live November 19, just four days before the movie opens in theaters on Thanksgiving Day. Those of you who are familiar with both SNL and the Muppets know that the show has a long history with the Muppets, going back to the very first season. Curious? Come inside, won’t you?

We’re really hoping that this means another cameo for the Muppets. They’ve shown up in SNL monologues several times. Though sometimes not quite “officially,” like that time Justin Timberlake sang with Kermit, who was being puppeteered by Will Forte, or that time Kermit hung out with Robert DeNiro. They’ve also been referenced and parodied in sketches pretty often. Bill Hader‘s Stefon on Weekend Update offered up a mean Miss Piggy “Hiiiiyyyyyeeeeaaaaa!” recently, and Andy Samberg does an awesome Swedish chef. On more than one occasion, almost the entire cast will get dressed up as a Muppet, and it’s just a thing of beauty to watch.

But going back even further, back to the first show that aired in October 1975, the Muppets had a regular, recurring sketch called the Land of Gorch. They were not the regular crop of Muppets, more like a Dark Crystal-style crew of characters whose material was slightly more adult. And it featured the one and only Don Pardo saying these words:

“Come with us now from the bubbling tarpits, to the sulfurous wasteland; from the rotting forest, to the stagnant mud flats, to the Land of Gorch.”

Billed as part of the “Not Ready for Prime Time Players,” these Muppets were, according to Lorne Michaels, the ones who “could stay up late.” (But not quite as late as, say, the Feebles.) It featured the tawdry tales of King Ploobis and his neglected Queen Peuta, both of whom were having secret affairs with his female servant Vazh and toady Scred, respectively. Their son, Wisss, is a stoner who sucks gases from the ground. But then there was the Mighty Favog, who offerered bits of wisdom in exchange for deadly sacrifices. They were performed by Jim Henson, Frank Oz, and Jerry Nelson (as well as Alice Tweedie, Fran Brill, and Richard Hunt) and lasted until April 1976. After they were gone, they were still referred to by the cast.

This is Jason Segel’s first time hosting SNL, and as a reliable comedy actor — and someone we can totally trust with the Muppets — this is one of those shows where you either pray or choose to start praying that they write some really insanely great sketches. We love Segel, we love the Muppets … and I love SNL, but they will have to really kick ass on this one.