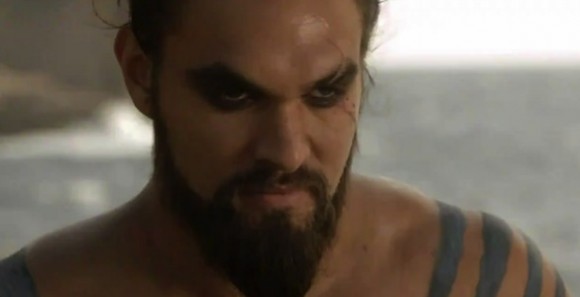 So, Jason Momoa is coming off a really good streak of success in the business we call “show.” He is currently playing the lead in Conan the Barbarian, which is doing … well, it was released this weekend. And he also played one of the more popular and mysterious characters on HBO‘s Game of Thrones, Khal Drogo. If you don’t know what happens to him, suffice it to say that Khal Drogo is not set to appear in the second season. But Jason Momoa has some ideas about how he can appear, despite what George R. R. Martin has written in his books, on which each season of the show is based. Oh, Jason Momoa. (Game of Thrones Season 1 spoilers after the jump.)

To put it bluntly, Khal Drogo dies. After being wounded, his queen Daenerys sacrifices their unborn son to save him, but he ends up a vegetable. Daenerys puts him out of his misery and his body is burnt on a funeral pyre.

But Jason Momoa is not having that at all. He had too much fun playing Khal Drogo for all kinds of reasons! And now, he says he has some ideas about how to bring Drogo back from the dead, author’s intentions notwithstanding:

“There’s a possibility you’ll see me do him again, It’s a fantasy world, sweetheart. I wrote some scenes and they might try to use them. George (R.R. Martin) can only write so much. Something could happen. Drogo could have a twin. You never know!”

You might recall that Momoa recently said he’s writing a sequel to Conan too, if that goes well. (So far … not so much. Not that this will stop him, something tells me.)

Okay. While it’s great, even natural, to see an actor want to take his characters further (especially if their character is on a very good show and ends up dying in the first season), it seems — just a teensy little bit — that Momoa is overstepping his bounds just a tad. And while it’s true that some series deviate from the books on which they are based — a good example is True Blood — maybe it’s not that cool to assume that a guy who plays a secondary character, albeit a popular one, is the right person to decide if his character is going to be brought back from the dead.

No one should ever discourage someone from writing. But why not just try to write something completely original, Jason Momoa, including the attributes of the characters you have enjoyed playing and turning it into a brand new character that has nothing to do with other people’s work? That way you not only have ownership, but no one will tell you that you’re coming off kinda cocky. Because you kind of are.