Japanese Ice Bras -- Because of the Nuclear Reactor | The Mary Sue

The Japanese Have Invented Ice Bras As a Result of the Busted Nuclear Reactor. To Keep Breasts Cool. Okay. 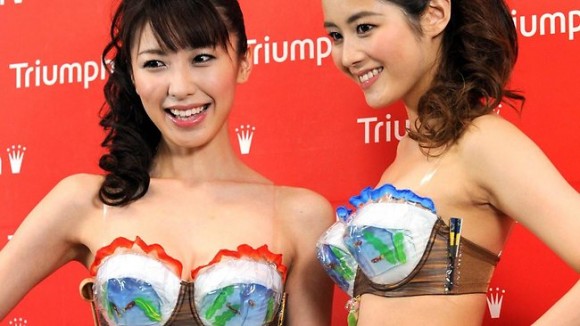 Yes, there is more important news about President Barack Obama expressing his public support for marriage equality. But these are bras with ice in them. They are from Japan, and they were created in response to the shutdown of the country’s nuclear reactors following the Fukushima catastrophe. This means that Japanese citizens are encouraged to avoid using air conditioners. Finally — women will have a way to keep their breasts cool and nipples erect for days on end. Gentlemen, consider this a consolation prize while you sweat your balls off, because there is no such contraption for you … yet.

I will not claim to be an expert on Japan’s nuclear power industry and how it relates to its female citizens’ breasts. But what I can say is that because of the earthquake that took place last year, the nuclear power plant in Fukushima exploded and leaked a dangerous amount of radiation that warranted the shutdown of every nuclear reactor in the country. Those reactors, however, provided a lot of Japan’s power, and that power has been greatly diminished ever since.

So, it’s going to be another hot summer in Japan. And therefore, women will need to put their tetas on ice. [Ed. note: I am not sure of the Japanese word for “breasts,” and I am slightly afraid to conduct an internet search.] As part of its continuing Cool Biz campaign, allow us to show you the Cool Breeze bra. It is comprised of cup-shaped ice packs held up by bra straps, a wind chime (because), and a sprig of mint (because). The fish that appear to be inside of the aforementioned packs do not seem to be alive, but I’m not going to make any assumptions.

As I said before the jump, there is no alternative for men who are not in possession of their own set of breasts. And actually, this might make them even sweatier than before, amirite? Because men like boobs and the act of looking at them? But if they create something to cool off the masses of suffocating Japanese testicles, you can be sure that we will keep you posted.

(The Age via Gizmodo)