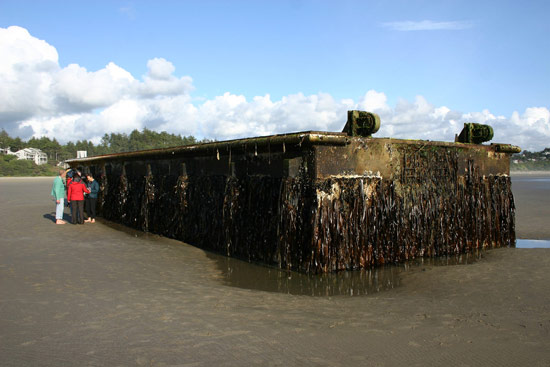 This past Tuesday, another somber reminder of last year’s horrific tsunami that devastated Japan washed up on the coast of the United States. An enormous section of dock from Misawa in northern Japan traveled across the Pacific ocean for over a year before finally washing ashore on Agate Beach, Oregon. Removing the enormous piece of debris will be tricky, but the non-native species onboard may pose the real threat.

The 66-foot long section of dock was first sighted off the Oregon coast on Monday, June 4th but was mistaken for a barge. When the 180-ton hunk of metal washed ashore, a stainless steel plaque on the side of the dock gave Oregon Parks and Recreation Department officials enough information to trace it back to its owner in Japan.

Though removing the gargantuan piece of junk will certainly take some doing, the Oregon Department of Fish and Wildlife is particularly concerned with the amount of marine life in and on the dock. Invasive species, like the zebra mussel, have wrought havoc on the Great Lakes marine ecosystem and Oregon wants to minimize the exposure of any non-native species to the local ecosystem. Of particular concern is “wakame” seaweed, a known invasive species.

When the tsunami struck Japan, it carried some five million tons of debris out to sea. According to NOAA, some 70% of it sunk off the coast of Japan — but that leaves about 1.5 million tons still to contend with. The U.S. West Coast is expecting more debris to arrive this summer, though even more is expected to arrive this winter because of the complex system of currents in the Pacific ocean.