Japan Will Be Getting Vending Machines That Provide Free Wi-Fi 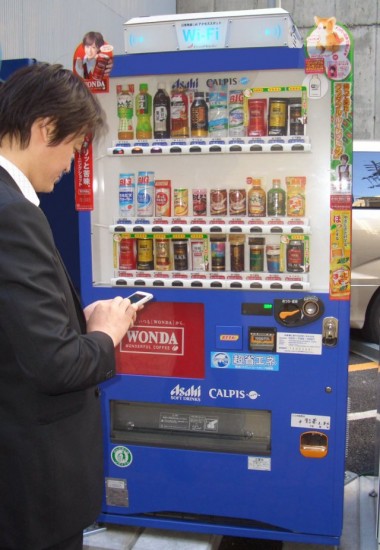 Pretty much everyone outside of Japan knows that Japan is a little weird, for better or worse. They’re pretty weird — or innovative, depending on how weirded out you are — when it comes to vending machines, offering a wide range of product through the automated box. Some vending machines over there work via an LCD screen rather than transparent glass, some serve up nothing but bananas, while others make hot ramen noodles and dump them in a bowl full of broth. Now, beverage company Asahi Soft Drinks will be unleashing a vending machine that provides free Wi-Fi to the Japanese masses.

Not only will the vending machines vend drinks, but it will also provide free Wi-Fi, without requiring people to purchase said vended drinks, and will also allow multiple devices to connect without registration. The plan is that the machines will provide around 30 minutes of Wi-Fi time before it disconnects the device, but it will be possible to simply reconnect. Maybe more of a wake-up call than a way to deter people from abusing the free Wi-Fi.

The Wi-Fi will spread out in a 50m radius, so people won’t have to crowd around the machine to hop on the Internet. Once logged in, users will arrive at a home screen with local information, such as shopping or sightseeing locations. Starting sometime next year, Asahi Soft Drinks will set up around 1,000 of the Wi-Fi vending machines across five Japanese regions: Chubu, Fukuoka, Kinki, Sendai, and Tokyo.