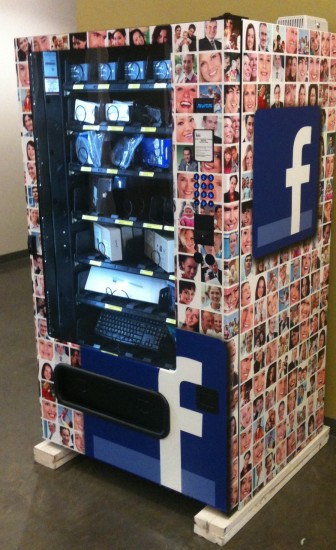 In addition to being (current) king of the social networking world, Facebook is also known for keeping its offices efficient and well-oiled, but also trendy and hip. You saw The Social Network, right? Well now, in addition to bean-bag chairs and a chef they are introducing vending machines that dispense computer accessories. Now hold on a minute, it’s for inventory efficiency, not just for show, but its still pretty cool.

While Facebook has never been so old-fashioned as to require requisition forms, they did previously have a inventory station where employees were supposed to sign in at kiosk before taking accessories. Operative word ‘supposed.’ Apparently less than 5% did, leaving records somewhere between “practically non-existent” and “actually non-existent.” After enduring this problem for a while, someone spotted an iPod vending machine at an airport and decided to suggest it to the IT department. Now Facebook has keyboard/cable/accessory vending machines spread throughout their offices and all an employee needs to do is swipe their name badge. They aren’t charged for the device, but now inventory is 100% traceable and your boss might find out if you go through three keyboards a day. Will these things be coming to an office near you? Well, first fill out this requisition form…