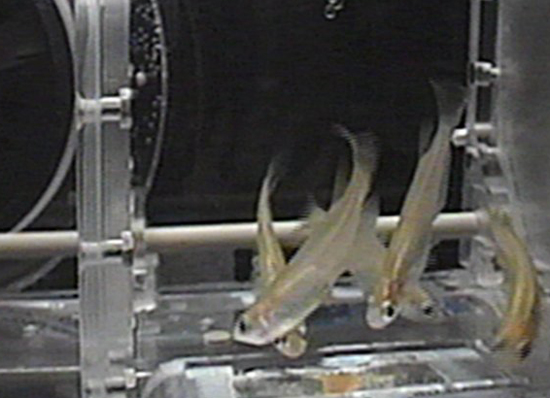 We’ve all heard of monkeys and dogs being launched into space, but one group that doesn’t see a lot of space adventure publication is fish. Well, the Japan Aerospace Exploration Agency is changing that by sending fish to the International Space Station in order to conduct a series of tests that will hopefully lead to a better understanding of human physiology on Earth. The end result might also include orbital sushi.

JAXA’s Aquatic Habitat, or AQH, sports an array of life support systems that make your aquarium’s filter look like a bendy straw. The AQH includes an automatic feeding system, an improved water circulation system, a mechanism for monitoring water conditions, an air-water interface, and LED’s that simulate day-night cycles. The sophisticated filtration system will allow fish to reproduce onboard the space station. This means that researchers will be able to conduct multi-generational tests on the fish.

The first fish on the ISS are Medaka or Oryzias latipes. This species was chosen for their transparent skin, which makes it extremely easy to observe the inner workings of the fish. Medaka also reproduce extremely quickly. Nobuyoshi Fujimoto, associate senior engineer at JAXA’s Space Environment Unitization Center, predicted that as many as three generations of fish could be born on the station. The genome of Oryzias latipes is also entirely mapped out, making alterations to the fish’s genes more noticeable.

The specific tests to be conducted include investigations into muscular atrophy, bone degradation, and the effects of radiation. Fujimoto also predicted that these effects will be applicable to human health and will help to solve a number of issues. The AQH will reside in the Japanese Experiment Module for the duration of the tests.