Is This History’s Only Look at Jane Austen as a Young Girl? 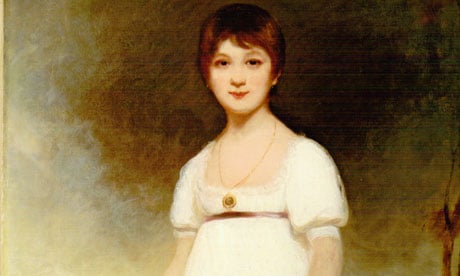 While the legacy of Pride and Prejudice author Jane Austen is fairly prolific, her image is not — few professionally painted likenesses of her exist. However, thanks to digital photo analysis, another image of her may have surfaced from obscurity.

The top right corner of a reproduction of a photograph taken of a canvas featuring a young teenage girl revealed the names Jane Austen and Ozias Humphry, a known portrait painter at the time. The words have been digitally enhanced using photographic tools that have been independently validated by Stephen Cole of Acume Forensics in Leeds, an established photography expert with 20 years experience contributing his expertise to criminal cases.

Owned by the Rice family, direct descendants of one of Jane’s brothers, the portrait’s validity has been contested since it surfaced in the late 19th century. The Rice family states that it was composed when Austen was 13, during a family visit to her uncle’s home in 1789.

However, since the 1940s, art experts led by the National Portrait Gallery have questioned its legitimacy, citing that “the style of the girl’s dress and the general composition date the painting after 1800,” during which Austen would have been 20, far too old to be the girl in the portrait.

Due to the fact that the digital photographic analysis was performed on a photograph of the canvas dating back to 1910 when photographer Emery Walker was appointed to take photos for a collection of Jane Austen’s letters, there is still a kernel of doubt regarding the validity of the portrait — it’s impossible to know whether or not the artist himself signed the portrait, or whether a later owner did. Nevertheless, because the painting is allegedly by a known artist, it is likely that it was attributed to him during his, and Austen’s, life time: “Whether Humphry’s name was signed by himself in the 18th century and/or by some other hand later, the attribution must be contemporaneous with Austen’s lifetime or by people who knew Austen when she was alive,” said Professor Claudia Johnson of Princeton University, suggesting that the evidence is enough to overturn any disbelief.