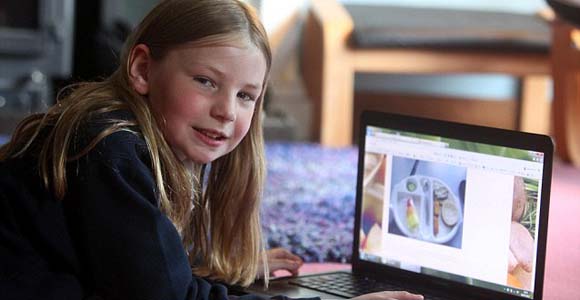 Nine-year-old Martha Payne was on her way to having a successful food blog. In April, she began not just documenting her school lunches on Never Seconds, but rating them on how healthy they were, how good they were, and how much they cost. On May 9 she wrote, “When I got up this morning Dad told me my blog had 25,000 hits so I thought I’d better not forget to count my mouthfuls!” But then things got really crazy. The next day the hits jumped to 105,000! And it’s all thanks to Food Revolution’s Jamie Oliver.

“My dad says I should call myself Veritas Ex Gustu, truth from tasting in Latin but who knows Latin? You can call me Veg.” That’s what Payne has in her blog profile so it’s safe to say that with her unique way with words, she’d have gotten fame regardless. Oliver just helped get her there faster.

How? With a tweet directed at Payne’s father. “Shocking but inspirational blog. Keep going, Big love from Jamie x.” He even sent her a signed book. 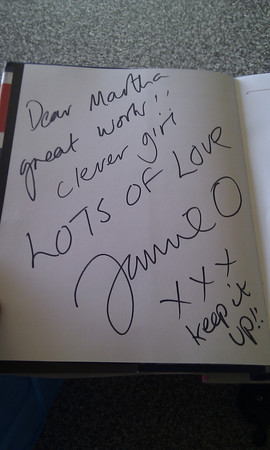 “Payne’s photos of the daily meal show a decided lack of balanced nutrition, including a plate containing a square slice of cheese pizza, a few kernels of corn, a potato croquette and a muffin. Subsequent posts show a similar deficiency in fruits and vegetables, until Jamie Oliver shows up,” wrote Oregon Live. “In subsequent blog posts, Payne’s lunch appears to be more balanced, and she writes about new lunchtime protocol.”

Oliver, as you may know, is a supporter and advocate of healthy eating. He’s been popular in the UK ever since his Naked Chef series back in 1998 but made a name for himself here in the US with Jamie Oliver’s Food Revolution on ABC.

“My Dad met the council today and its official that we are allowed unlimited salads, fruit and bread! I’m really happy that all of my friends can help themselves to good stuff,” Payne wrote on her blog.

Keep an eye on Payne’s blog, she tells great stories. Who knows? She could be the next celebrity chef! Speaking of which, we usually leave the food stories up to our sister site, The Braiser, but we couldn’t pass up this adorable gal. And hey, there’s always room for cross-over, check out The Braiser’s story on Martha Stewart trying to get a role in The Avengers sequel! You’ll never guess who she wants to play…