Thor’s Jaimie Alexander On Wonder Woman: It’s Embarrassing For Me As A Woman 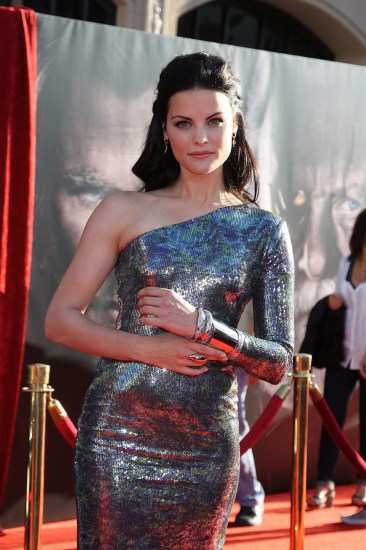 Thor star Jaimie Alexander’s name is one that pops up frequently on dream casting for Wonder Woman, and if you saw her kicking butt as Sif, you know why. But while the actress herself would love to play Diana, she’s not sure she actually would if asked. Why? Well because no one treats Wonder Woman with respect, of course. Click ahead to see the awesome truths Alexander laid down recently about women in superhero properties.

Alexander was interviewed by MTV News about comic book roles in both the Marvel and DC realms.

“I used to be,” Alexander replied when asked if she’d be into playing DC Comics’ Wonder Woman, “and then I’ve seen how many failed attempts they’ve tried to make at re-making it and it’s embarrassing for me as a woman, seeing what they did with that TV show.” She was quick to add, “It had nothing to do with that amazing actress Adrianne Palicki.”

She’s referencing of course the failed David E. Kelley Wonder Woman pilot for NBC which the creator himself recently said he’d still try to pursue in some fashion if The CW’s Amazon series doesn’t work out. “We made mistakes with ours. My only regret is we were never given a chance to correct them. We had a lot that was right about it and a great cast. In time, we could have fixed what we had done wrong, we just didn’t get that chance,” he said.

“Let’s talk about this for a second,” Alexander told MTV, “you’ve got very few female superheroes that are dominating films these days, unless they’re in a skin tight outfit and their boobs are pushed up to their chin, you know? And it’s not okay. It’s not.”

Moviegoers may recall a highly-capable, fully-clothed and armored Sif in Thor. I wonder how much of that was at Alexander’s insistence?

“There needs to be a positive role model,” she continued. “If you’re going to make Wonder Woman, make it like The Bourne Supremecy, you know. Let’s do something awesome like that. Like Alias was a fantastic show. Why can’t we do that? Why does she have to be in hot pants and spandex and all this stuff? And yeah, I get it, it’s visually stunning for, you know, half of the people, but at least make her grow a pair! I mean, I’m serious, ok. All she does is sit and eat ice cream while she’s crying over a boy. I know that never aired, but that’s what the script said and I was like, ‘What?!'”

“What?!” was the general consensus on Kelley’s Wonder Woman and while many are thankful it didn’t get a series order, it was disappointing to see the character fail because she wasn’t handled well. We may talk about these issues all the time but it’s nice hearing someone of Alexander’s status echoing our sentiments for a larger audience to hear. With her very valid issues in mind, would the actress play anyone besides Sif?

“I’m too old to play X-23. I’ve been told 100 times. It’s okay! I get it,” she said when asked about other heroines she’d want to play. “I always wanted to play Jubilee but missed that one too, I’m not a teenager anymore.”

Perhaps we can suggest other comic book characters for her to play but in the meantime, you can catch Alexander reprising the role of Sif in Thor: The Dark World come November.