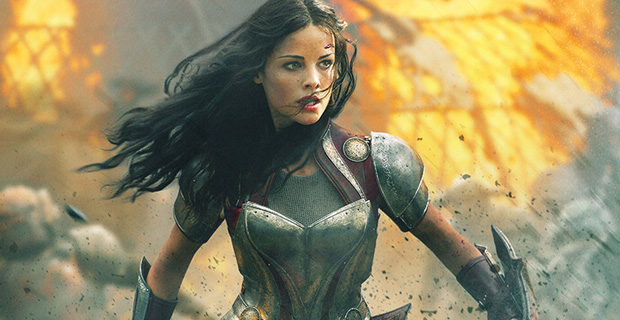 In an interesting interview with Variety earlier this week, Jaimie Alexander, known for her role as Lady Sif in the MCU and playing Jane on NBC’s Blindspot, talked about being one of the actresses who was initially in the running to star in DC’s Wonder Woman movie. But Alexander, who’s said in the past that some of the less successful Wonder Woman adaptations were “embarrassing for me as a woman,” wasn’t disappointed about not getting the part:

I’m excited to see what she’s [Gal Gadot] going to do with the role. I was one of a few people that were an obvious choice for Wonder Woman, but it was never going to happen. I’m contracted with Marvel and it would (be) strange. Sif, in her way, is Marvel’s Wonder Woman. They’re both ethereal and have armor and a sword, and have special abilities; the physicality of the role is very similar. The thing I really enjoy about Marvel is that they start with a character first and all the explosions and costumes, the glitz and glam, are secondary to who the actual character is deep down. That’s something I haven’t really been able to find with DC Comics. I know that’s a bold statement, but it’s been my experience.

In addition to pointing out the different creative styles between Marvel and DC, Alexander also talked more about why she finds it so rewarding to play Sif:

Each time I get to play her, there’s this growth in the character and we find out more of who she is. That is a blast, because I’ve been able to slowly create this woman while still taking directions from all the comic books that existed before my performance. It’s interesting that Sif has such a big backstory, whereas [Blindspot‘s] Jane has no backstory at all; they’re very opposite while at the same time both very tough and vulnerable. It’s a bit of a niche for me, I guess.

To hear more from Alexander, including why it’s so important to her to play women that aren’t just set dressing for a male lead, head over to Variety.