Jacob Chansley Is Not a Goddamn Shaman 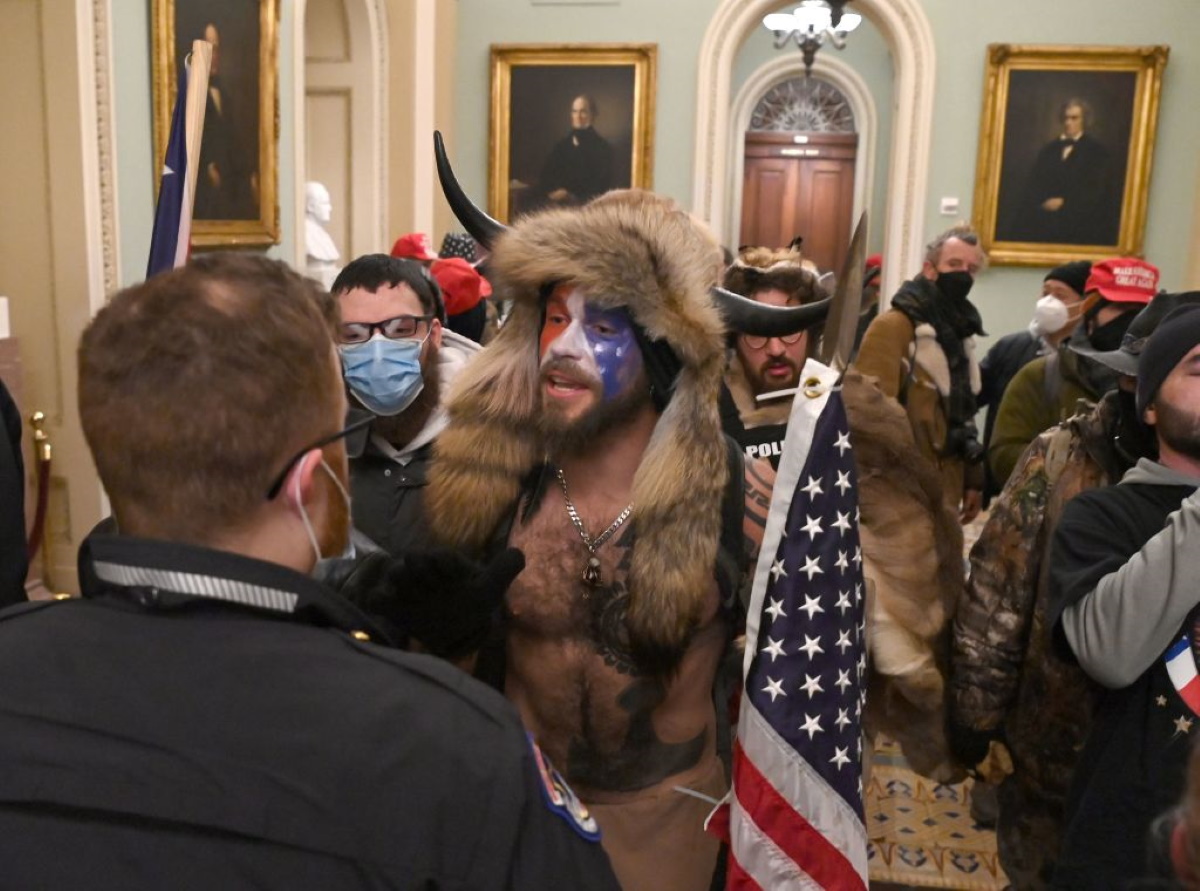 It has been nearly a month since extremists and white supremacists stormed the US Capitol, and we’re still dealing with the seismic impacts of that day. One face almost instantly became associated with the day: that of Jacob Chansley aka Jake Angeli or the “Q Shaman.” He appeared with his face painted with the colors of the flag, a mockery of a headdress making him stand out in the crowd, bad tattoos of symbols he does not deserve to wear displayed on his chest for all to see. Chansley was an instant icon of the insurrection. He was also full of crap.

Like all things about Trump, QAnon, and the modern conservative movement, Chansley’s act is built on nothing but bullshit and a heaping dose of racism and white supremacy. He is not a shaman or a heathen and his use of those terms and that iconography is incredibly insulting to the cultures and people he’s stealing from. He has no right to claim “shamanism” as a religion that should get him special treatment in jail or defend his traitorous actions.

Since his arrest, Chansley had continued to make headlines with his demands for organic food while in jail. This is a ploy to get more attention, but the entire saga highlights the absolute poppycock that Chansley is selling as his religious beliefs and how insulting it is to those that actually practice shamanism.

Yesterday, Chansley’s lawyer Albert Watkins appeared in court asking for Chansley to be given special treatment in custody because he needs organic food as part of his shamanic diet.  According to Insider: “Watkins argued in the new court filing that Chansley was a legitimate shaman, citing the Wikipedia page for “Shamanism” in a footnote.” While arguing that Chansley deserved organic food because of his shamanic beliefs, Watkins wrote:

Based on Mr. Jacob Chansley’s shamanic belief system and way of life, non-organic food, which contains unnatural chemicals, would act as an ‘object intrusion’ onto his body and cause serious illness if he were to eat it … An ‘object intrusion,’ is the belief that disease originates outside the body from unhealthy objects coming into the body. In shamanic traditions, the body, mind, and soul are interconnected, and the well-being of all three are necessary for my client to be able to practice his faith.

Reader, please know that this … is not a thing. Jacob Ansley’s shamanism has no basis in any shamanic practice I know of because like everything else in the QAnon world, it’s fabricated in bad faith.

Shamanism is a tricky term and thus it’s hard to pin down what it is. Many indigenous spiritual practices, as well as animistic or spirit-focused paths are incorrectly referred to as shamanic. “Shaman” is used as a blanket term for a spirit worker or someone who works natural forces and intercedes between humans and the divine, mainly in ancient or Indigenous cultures, but the actual word “shaman” is from Siberia. Here’s Julia Penelope on Patheos Pagan writing why the use of the word needs to be sparing.

Shaman is a Tungusic Siberian word used by said people to describe their spiritual leaders, it stems from the root să which means to know. It was first recorded historically by 17th-century Dutch explorers and has since taken on a meaning of its own. Anthropologists, New-Age healers, archaeologists, neopagans, religious leaders, indigenous groups, and art historians, just to name a few, all use the word shaman.

What Penelope argues in her article, correctly, is that “shaman” is a word heavy with colonialism and white supremacy because, why not call these practitioners priests or magicians? They do the same things. “Shaman” is used for any “primitive” religious leader and thus creates a false dichotomy between “savage” and “evolved” practices. It’s a word that’s both othering and reinforces cultural superiority. It represents both the ignorance and disrespect of actual indigenous practices and the Western and white tendency to amalgamate, misinterpret, and commodify those same practices.

There is no one “shamanic” practice and even so, whatever Jacob Chansley is doing isn’t close to anything remotely “shamanic.” He’s a racist, appropriating the trappings of other faiths he has no respect for or understanding of, and that doesn’t just include “shamanism.” He’s covered in bad tattoos of Norse origin, leading many to call him a “Viking,” but members of Norse pagan communities (referred to as heathens) have vocally denounced him. Not just because his antics give Heathenry a bad name, but because … he’s Christian.

Yep. You read that right. Dudes a Yahweh fearing man who loves to share boomer Christian memes. Not something us Norse Heathens tend to do in our spare time. Our gods are Odin, Thor, Freyja, Hel, Tyr. Gods who are absolutely disgusted with the actions of Jake here. pic.twitter.com/ampOuQ4RFW

It’s important to note that there are groups of Norse pagans who support racist and white supremacist ideologies (just as there are many Christians who use their faith to reinforce white supremacy and racism). These are known as Volkish or Neo-Volkish groups and are generally condemned among the wider Heathen community.

But the point here is that Chansley is none of these things. We have video of him giving a very Christian-sounding prayer in the Senate chamber when he tried to overthrow democracy. QAnon itself is an inherently Christian belief given that it’s all about, ya know, Satanists in service to the Christian devil. And before you ask, no, Christian Shamanism is … not a thing with any basis in history or established practice. Just because he claims to be something doesn’t mean he is or that it’s real.

Chansley has won his request for organic meals, sadly. (If this feels like deja vu it’s because he made the same requests in Arizona and was coddled there too, but now he’s in Washington). And that’s infuriating because he’s appropriating a garbled misinterpretation of indigenous religion to get special treatment and attention and he did so to support a racist president. It’s the seven-layer dip of racism and it’s so contrived it’s not even organic.

Chansley is apparently taking a hard look at his QAnon beliefs and coming to terms with the fact that maybe Donald Trump didn’t care about him at all. Watkins told the Daily Beast that Chansley “has come to grasp the fact that the former president really didn’t love him and that all the bullshit about Trump’s army and all the social media-driven conspiracy theories led to a lot of the vulnerability.”

Well, boohoo. He’s finally learning that his brand and his beliefs were built on bullshit. I hope it’s the start of some actual learning for Jacob Chansley, because he’ll have a lot of time to think about all of this in jail for many years for trying to overthrow the government. And while he’s there he’s not entitled to organic food.