Jack the Ripper’s Identity “Confirmed” by That Bastion of Scientific Thought: The Daily Mail 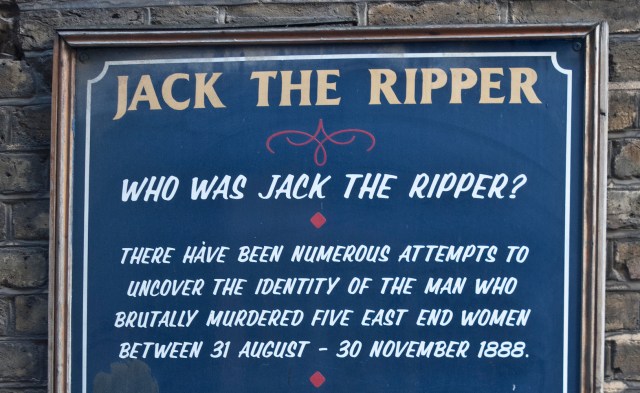 We finally know who Jack the Ripper was, and we have the Daily Mail to thank! It was Walter Sickert! Er, I mean, it was actually a woman who worked for Salvation Army! Wait no, it was actually Aaron Kosminski, a crazy hairdresser! For real this time, you guys! Guys? Where are you going?

Don’t you want to stick around and hear about the amazing scientific progress made by an author and his scientist pal that they decided to reveal exclusively via the Daily Mail just days before the author’s new book on the subject goes on sale? How could this possibly not be a legitimate scientific discovery? It’s not like the two other theories I mentioned were both put forward on the Daily Mail within the last year by authors with books to sell. That’d sure make this new story seem a bit less credible. But this one is confirmed by evidence and science and stuff! Kind of.

Anyway, so author Russell Edwards, whose book entitled Naming Jack the Ripper comes out tomorrow, has been on a quest for years to prove a shawl he received at an auction was not only a piece of direct crime scene evidence from the Jack the Ripper murder of Catherine Eddowes but that it contains the Ripper’s DNA. Dr. Jari Louhelainen, associate professor of molecular biology at Liverpool John Moores University, helped him out with some of his own “innovative” DNA research techniques.

Of course, he talks a bit about how he proved the shawl, which has changed hands numerous times and reportedly never been washed, had DNA of both the victim and the killer in his part of the Daily Mail piece. That’s as good as putting it in a peer-reviewed scientific journal so that we can all examine his methods and confirm the validity of these amazing findings, right? What I—and probably the rest of the scientific community—am most interested in is the sophisticated technique he came up with in his spare time to extract the 126-year-old DNA, which would have been impossible with traditional methods.

It’d be nice if Dr. Louhelainen would quit holding out on us and detail this new miracle technique, which he calls “vacuuming.” I mean, my apartment would certainly benefit from a vacuuming technique capable of extracting century-old buildup. I’m surprised he didn’t go one step further with his scientific breakthroughs and just straight up Jurassic Park us a Jack the Ripper clone so we could ask him who he is in person.

Remember, the DNA evidence is absolutely pivotal to this whole “confirmation.” Without it, there’s no proof the shawl is even related to Eddowes’ murder aside from a letter from a policeman who was on duty the night of the murder, which hardly verifies its authenticity.

And we have no way of knowing whether the DNA evidence is anything more than an empty or mistaken claim. Sir Alec Jeffreys, who developed forensic DNA techniques 30 years ago, has his doubts. He told The Independent:

An interesting but remarkable claim that needs to be subjected to peer review, with detailed analysis of the provenance of the shawl and the nature of the claimed DNA match with the perpetrator’s descendants and its power of discrimination; no actual evidence has yet been provided.

He also said, “If I remember correctly when I visited the Black Museum at New Scotland Yard, Kosminski was long regarded as by far the most likely perpetrator.”

So if a shawl really did exist which had the DNA of both a victim and the most likely suspect, some verifiable scientific proof of that from an actual source of such information would be pretty convincing. But since that’s not what we have here, the idea of it will probably be compelling enough to sell a pile of books. Then in three months, we can move on to the next bit of dubious “proof” about how Jack the Ripper was actually a space alien or illuminati lizard person or whatever.

(via The Daily Mail, image via Berit Watkin)

Previously in things that aren’t science