It’s Still Not a Planet, But You Can Name Pluto’s Moons! 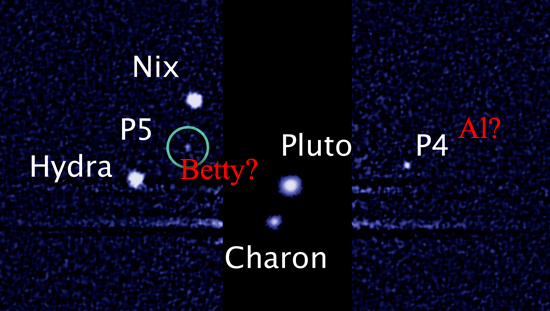 Our old friend Pluto may still be sore about its demotion from a planet to an ice dwarf, but the good news is that we can name its moons. Two of them, anyway. Today, the SETI Institute has opened up the official naming to the public. Keep reading to learn what names are out to an early lead and how you can put your two cents in.

First we discovered Charon in 1978, then Nix and Hydra in 2005, giving them names that established the chthnonic theme of the Roman god of the underworld. And while we’ve known about Pluto’s fourth moon (P4 has been the stand-in name) for a year and a half now, SETI’s been holding out, hoping to establish a naming pair if a fifth was discovered. Seven months ago, the icy satellite P5 was spotted, and now we’re all breaking out the baby name books.

Of course, celestial nomenclature has its mythological traditions, so they’ve already supplied us with twelve solid names to choose from. Or if you’re up to the challenge, you can also suggest a name of your own devising. But you’d better be ready to make a good case for it. The river Styx is already in the lead — with Charon already on board, how can it not be? — and Pluto’s girlfriend Persephone is currently runner-up. If you’re passionate about the right names making the cut, you can cast your vote once a day, every day, up until Monday the 25th.

Apparently, I’m in the minority. Lethe, the river of forgetfulness, and Acheron, the river of pain, would be my choices. With other underworld waterways on the table (and both Hydra and Nix being water-affiliated creatures), what better pattern can there be? And if not, oh well. It’s not like the universe is going anywhere. There’s an endless supply of celestial bodies that still need discovering. And naming.

For right now, though, you can go to Pluto Rocks to cast your vote and be heard!