Beckett & Lanie Won't Be In Castle Season 9 | The Mary Sue

You Can’t Have Castle Without Beckett. Why Didn’t Stana Katic Get Asked Back for Season 9?

Oh, and Lanie's leaving too. Great. 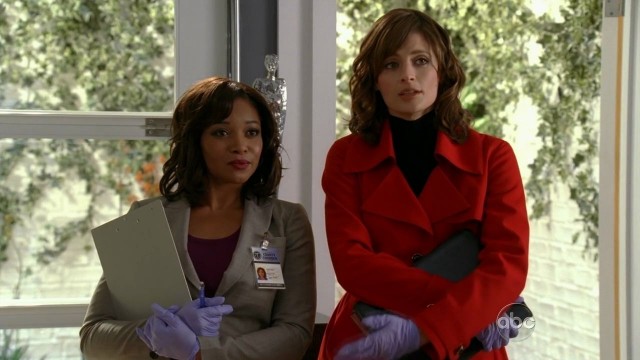 Stana Katic and Tamala Jones, who play Detective Kate Beckett and medical examiner Lanie Parish on ABC’s Castle, will not be returning for the show’s upcoming ninth season. This is particularly shocking news with regard to Katic’s role. Up until now, she could easily be considered the star of the show. Sure, the show is named after Nathan Fillion’s character, Richard Castle, but without the dynamic and chemistry between him and Katic, Castle would never have lasted eight seasons … let alone nine!

This decision would make a lot more sense if Stana Katic and Tamala Jones had been the ones to decide not to return. After eight seasons, one might imagine needing a break from the procedural TV grind! However, Deadline reports that ABC made the decision not to ask Stana Katic and Tamala Jones to come back, citing “budgetary reasons” (!?). Nathan Fillion is in talks to return, but a “major shakeup” will occur for the ninth season. I mean, it’d have to open with a “major shakeup,” since one of the two stars is not going to return!

Castle is pretty formulaic, since it’s a procedural mystery TV show, but it’s actually a lot less formulaic than shows like Murder, She Wrote (the nominal inspiration for Castle, since it’s also about a mystery writer, but that’s the only element that these two shows have in common). Unlike MSW, which is unashamed of doing almost the exact same thing in every episode, Castle seems weirdly determined to try to change its core conceit, season to season. Almost every time it has tried to make a big sweeping change (e.g. Beckett changing jobs and moving away, Castle being MIA), it has ended up resetting “back to normal” once again, in the end. Personally, I watch procedural mystery shows as a relaxing reminder of the constants in life, not because I want to see a “shakeup” of the formula. The formula is the reason why I watch!

I’ve watched all of Castle, which means that I’ve seen the show go through several structural and tone changes over the years. The hardest leap that the show had to make was transitioning its two lead characters from “will-they-won’t-they” romantic tension to “dating” to “married” in a way that felt natural. Most shows can’t stick the landing on this, but I actually think Castle did. Unfortunately, though, it seems like Castle wants the best of both worlds: it wants to have the multi-season stamina of a procedural, but it also seems afraid of stagnating or settling down … even though its two leads have literally “settled down,” and would probably be fine solving the same types of mysteries over and over.

These days, a lot of the show’s plot-lines revolve around either Castle getting kidnapped or put in danger (at which point Beckett must rescue him), or Beckett getting kidnapped and put in danger (in which case Castle and/or the rest of the police department saves the day). None of these plot-lines ever feels particularly stressful to watch, though, because the viewer knows that Castle and Beckett will be safe. Even when their relationship suffers from significant stress or internal strife, they end up back together every time. Unlike the writers of this show, however, I don’t consider that repetition to be a bad thing. The knowledge that the two leads of the show are not going to die, and will continue to be happy, is a comfort.

I’ve always thought the show worked best when Beckett and Castle aren’t fighting or kidnapped or missing. The writers seem determined to throw conflicts in between these two, rather than allowing their relationship to be the rock that remains steady. Obviously the show needs conflict to work, but that conflict could arise from the environment around them, rather than driving a wedge between them. Maybe a procedural show about two people who are in a happy, healthy relationship just isn’t possible, but I guess I always hoped Castle could be the exception to that rule.

This news leads me to believe that perhaps the Castle writers want to “shock” us by potentially killing off Kate Beckett, or Lanie, or even both of those women. I seriously hope I am wrong about that prediction, not least because it would result in an angsty plot-line where Castle gets revenge (blech). Beckett leaving the show manages to sound both stressful and boring at the same time, since it will remove the central relationship around which the entire show revolves. Do the writers really think that Nathan Fillion can carry this show without Stana Katic?

Here’s my last hope for season nine: I’ve long suspected that the show might be slowly building up to Richard Castle’s daughter, Alexis Castle, becoming the titular protagonist of the show. Now that Alexis is an adult and also helping out with cases, it would make a lot of sense for the show to change its focus over to her. I would love to see her become the “Castle” of the title, and to see Nathan Fillion serve as a side character rather than the lead. That’s one of the only compromises I can even imagine watching, if Lanie and Kate disappear.

Unfortunately, it’s also really hard for me to imagine a plot-line that would get rid of both Lanie and Kate Beckett in a way that doesn’t make me completely hate this show, so … I guess I’ll just have to wait and see whether it’s worth my time to stick around. I’ve already continued watching this show long past the point that everyone else gave up on it, so clearly, I’ve got a lot of patience. But I just don’t know if I’m willing to stick out yet another ill-advised “shakeup” on this show.

(via Deadline, image via FanPop)