Why wasn't this a thing when I was in high school? No fair. 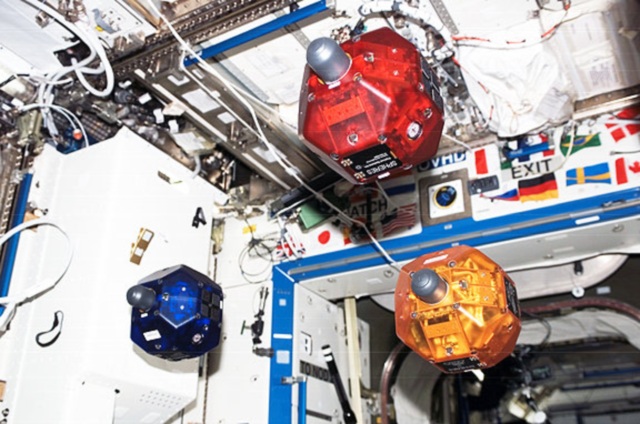 Why didn’t Yogurt see the merchandising potential of Spaceballs, the robotics competition? Students from the U.S. and Europe can sign up to be challenged in what is described as “the ultimate robot game” to navigate floating spheres through the International Space Station in culmination of the Zero Robotics programming competition. I’m not even allowed to compete, and I’m excited about this.

The competition, organized by MIT and the European Space Agency, centers around using volleyball-sized SPHERES (it stands for Synchronized Position Hold, Engage, and Reorient Experimental Satellites) each equipped with 12 jets of compressed gas to move them in different directions in microgravity. Teams from secondary schools program algorithms to maneuver the satellites to complete game objectives by navigating obstacles and accomplishing designated tasks.

The initial competitions take place in computer simulations done online, but top teams will have their code put to the test on the SPHERES themselves in the finals next January aboard the International Space Station. After getting past the 2D and 3D modeling challenges in the fall, teams form alliances for the last phase of competition and get to see their programming get executed live in space.

The Zero Robotics program was founded in 2009 by MIT’s Space Systems Laboratory and astronaut Greg Chamitoff as a way to connect students to the space program and teach engineering and problem-solving skills. The first competition had only two teams from schools in Idaho, but has since expanded to dozens of teams throughout the U.S. and European countries. The technology of the SPHERES has significant practical applications when it comes to space-docking, formation flight, and autonomous satellites.

Registration for U.S. teams is still open until the end of June, while Europeans have until September.