Iron Man Guardians of the Galaxy Rumor | The Mary Sue

Interesting, Reasonably Plausible Iron Man 3/Guardians of the Galaxy Rumor of the Day 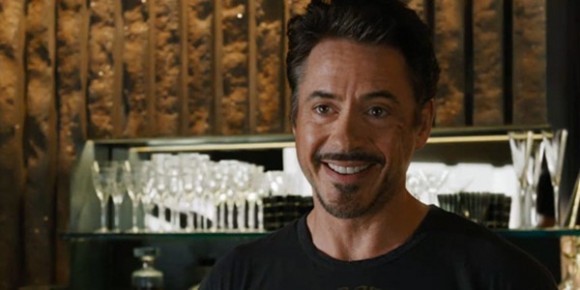 There’s a potentially spoilery rumor going around today about Iron Man 3. Or at least it would be a spoiler if it’s true, which it might not be. At the moment a lot of the evidence seems circumstantial to me. However, all the evidence also points towards something that I think is 100% in Marvel Entertainment’s interest to do. What the heck does that mean? Well, if you can stand the possible spoiler, follow me down this rabbit hole of early releases of toy lines, unnamed sources, and a thing Robert Downey, Jr. said.

The earliest I saw of this rumor was the reveal of Funko Pop’s line of Iron Man 3 tie in toys, which as of yesterday, featured not just Iron Man, War Machine, and Iron Patriot but one extra toy labeled as a Deep Space version of the Iron Man suit. In fact, the blog I saw it on yesterday even had an image, which has since apparently been taken down at the request of Funko Pop.

The second item of interest was how Robert Downey, Jr. answered a question in an interview with Entertainment Weekly published yesterday:

ENTERTAINMENT WEEKLY: Iron Man 3 picks up not long after the alien invasion of New York where Tony Stark went into battle at the side of a thunder god, a living legend from WWII and a giant green man-monster. Will we see any of those Avengers in this movie? Or does this movie need to be Tony’s Me Party?

Robert Downey Jr.: The whole Avengers thing [with $1.5 billion in global box office was such a relief and such a confirmation of [Marvel Studios President] Kevin Feige’s vision for this all along. As Kevin has put it, the next step after that is to bring in someone like Shane Black and – without pretending that the Avengers don’t exist – find a way to go back to a kind of re-investigation of Tony’s world, which he thought would be, one, fun for the audience and, two, would rock in a different way than The Avengers. But we can’t help it — everywhere you look now in every Marvel movie there are opportunities where certain new pals of his could be useful. So they’re in the atmosphere, so to speak, but I wouldn’t expect to see them on the ground in this one.

That last bit, about characters being “in the atmosphere” but not “on the ground,” is the one lots of people have latched on to. This seems way less like “something that is up” than Funko Pop asking websites to take down pictures of a toy. I mean, certainly Robert Downey, Jr. would be the first of the actors on the Avengers roster to drop a hint about how crazy his movie is going to be that fans could pick up on, and if Downey said them in a that suggestive way that we all know him capable of, then I’d call this one more concrete. But EW is just text, and this could very well just be a plain statement.

And in case you haven’t guessed yet, the conclusion this rumor wants to draw is that Iron Man 3 will make references to Guardians of the Galaxy, possibly with Tony Stark in space, meeting one or more of the members of the team, and that Stark will also make an appearance in Guardians of the Galaxy. That’s precisely what, according to Latino Review, “sources” are saying.

So take this with plenty of salt to taste, however, I will say one thing more. This move, to bring Iron Man in on Guardians of the Galaxy, makes complete sense from Marvel’s point of view. With the death of Agent Coulson in The Avengers, the franchise lost the one character that managed to tie all of its movies together, and while I’m elated to see him returning for S.H.I.E.L.D., Marvel now has to dig itself out of that narrative hole. They need a different character to bring their Phase 2 into a connected web of stories and hint at the meta-plot that will eventually bring us to The Avengers 2. As far as appearances in the Marvel Cinematic Universe, Tony Stark is tied with Nick Fury, and well, lets just say it, one of those guys is much more likely to be found in space than the other.