The full trailer for Iron Man 3 premiered online in the wee hours of this morning, but the thing we’ve fixated on most in the hours since is not the hints of Tony finally enduring some significant psychological ramifications from his crime (ok, alien) fighting, the promise that his world will be pulled down, or Ben Kingsley‘s at-little-too-similar-and-a-little-too-soon-to-not-be-compared-to-Bane voice over. No.

It’s the apparently enormous plush bunny in the back ground of one split second shot of an explosion in Tony’s Malibu mansion. We asked for explanation on Twitter, and here are some of our favorite Head Canons (that is, explanations).

First we had to put out the call:

We’re taking all suggestions on why there might be a giant bunny in the background of the Iron Man 3 trailer: themarysue.com/iron-man-3-tra…

@the_marysue Wasn’t there a giant bunny in Civil War? Or was that just something I imagined in order to get THROUGH Civil War? — Ashly J. Williams (@newageamazon) October 23, 2012

Of course we have our own theories:

You wear a disguise to look like human guys, but you’re not a man, you’re a Bunny Boo. #giantbunny #canthelpmyself — The Mary Sue (@The_MarySue) October 23, 2012

It was left to Tony in Coulson’s will. #giantbunny

@GoFlyAKate pointed out something very interesting, though 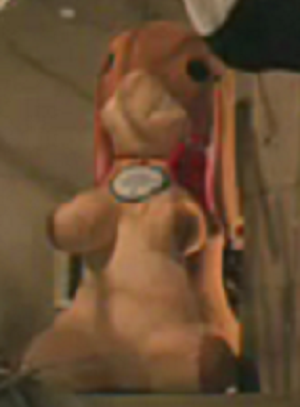 So now my favorite Head Canon is that this is the equivalent of the stuffed animal that you give to a kid who’s in the hospital.

And finally? The mysterious giant bunny in the background of one shot in the Iron Man 3 trailer has a twitter account. And it’s kind of sad. And kind of creepy.