Miami’s Mayor Is Right: Now IS The Time to Talk About Climate Change 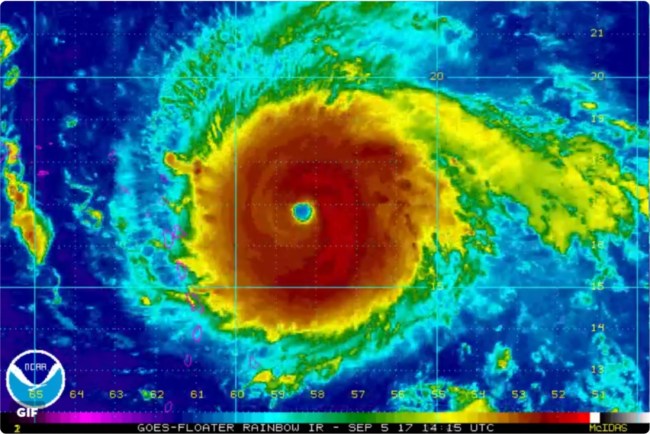 Scott Pruitt, the climate change denier who is in charge of the Environmental Protection Agency (EPA), has been annoyed at all this talk of climate change as Irma, the most powerful Atlantic hurricane on record, rips through the Caribbean and makes landfall in Florida. He called the discussion “very insensitive” to those suffering the effects of the storm. “To have any kind of focus on the cause and effect of the storm, versus helping people, or actually facing the effect of the storm, is misplaced,” he told CNN.

Now, in fairness to Pruitt: yes, of course disaster relief and aid should come first. Saving lives is the priority here. But if we’re actually serious about saving the lives of Floridians, Mexicans, and residents of the Caribbean nations in the future, we do need to discuss the fact that, thanks to climate change, there will likely be another Irma in the next few years. Even with all the other factors at play during a given hurricane season, such as whether there’s an El Niño, one thing we do know about climate change is consistent: “bigger storms are going to get bigger.”

And that means we, as a country, have a responsibility to prepare and protect those Americans who live in the path of these ever larger storms. If hurricanes are going to hit the Gulf and the Caribbean more frequently, because their large size allows them to make landfall, we cannot afford to scramble every time they happen. We cannot afford to rely on stingy Joel Osteen or a Red Cross fundraiser for our disaster relief. We need to develop plans, and we need to shore up endangered cities.

As Darlena Cunha’s editorial in The Washington Post eloquently argues, there are no good options for Floridians who have to evacuate right now. Florida’s infrastructure, with only two major interstates, is not built to enable the sort of mass evacuations that Category 4 and 5 hurricanes make necessary. In addition, the government is either unprepared or unwilling to make the necessary evacuation resources available.

“Meaningful evacuation,” Cunha wrote, “would have meant public transport, safe shelters along the way, medical help and facilities throughout, and safe shelter, food, water and sanitary supplies on the other side of it all. For free. Because evacuating is expensive: You need gas and a reliable vehicle. You need good health to make a slow-moving, anxiety-inducing journey with thousands of other people surrounding you at every turn. You need money to buy supplies and emergency equipment, and to miss work. You simply need things we don’t normally have. Being prepared is a luxury, and it’s not always possible.”

The U.S. island territories are also similarly under-prepared. Puerto Rico’s electricity infrastructure was decimated, and the remote Virgin Islands are repeatedly forced to ad-hoc their evacuation and disaster relief.

Obviously, in case this bears repeating, we need to help the people who are affected by this disaster immediately. That comes first. (And if you’re one of those people talking about how Trump-voting Floridians “deserve” Irma for voting in a climate change denier, STOP.) But we would serve the people suffering from Irma and Harvey far better if, as part of the relief funding, we made sure to talk about steps for the future. We need funding for sea walls, for better highway infrastructure, for evacuation planning and disaster relief resources. We know more of this is coming, and it’s crucial that we demand solutions to prevent further displacement and pain for the people it’s coming for. But we can’t demand those solutions without explaining why they’re necessary – and that reason is climate change.

Even those politicians who want to deny the causes of climate change, need to at least acknowledge the existence of it – and what that existence means they have a responsibility to do. Preparing for the effects of climate change is a moral necessity. You cannot pretend to care about the people of Florida, Texas, Louisiana, or Puerto Rico when one disaster strikes if you don’t care enough to protect them from the next one.

Obviously, we would serve the people of the Gulf and Caribbean best if we actively fought the climate change that is threatening their homes, if we worked to prevent the rising sea temperatures that create more monster storms. But short of that, the very, very least we can do is try to shield them from the impact of those storms.

And to get that done, we need to start talking about it.

(Via The Hill and The Washington Post; image via National Hurricane Center)