Thousands Marched for Abortion Rights In Ireland, Urging the Government to Repeal the Eighth Amendment 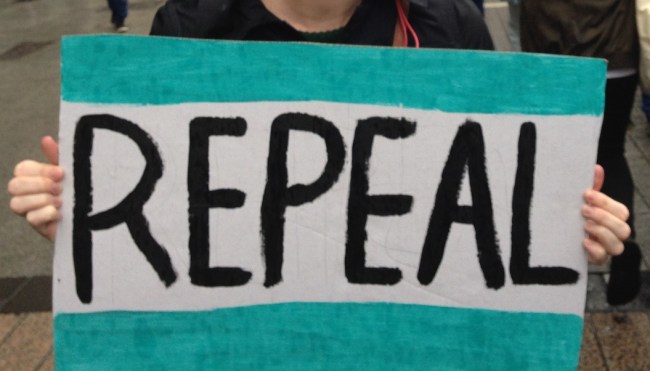 In the Republic of Ireland, thanks to the Eighth Amendment to the constitution, abortion is almost entirely illegal. There are a few exceptions, only signed into law in 2013, which provide for a legal abortion in cases where the pregnant person’s life is at risk, but otherwise anyone who undergoes an abortion in-country can face up to 14 years in jail. (Remember how terrifying it was when Trump suggested there should be “some form” of punishment for women who get an abortion? Irish people are living that nightmare right now.)

Both countries have been repeatedly condemned by international organizations. For example, the Human Rights Watch wrote a devastating report on the Republic’s laws; the European Court of Human Rights ruled that the Republic’s anti-abortion laws violated a woman’s constitutional rights; and a United Nations committee ordered the Republic to pay compensation to a woman who had to travel to the UK for her abortion, declaring that the country had violated her human rights.

These laws have also killed women. Savita Halappanavar died in a Galway hospital after doctors refused to induce or abort her fetus despite her overwhelming pain. When she requested an abortion, Halappanavar, a Hindu, was reportedly told that Ireland is “a Catholic country.”

The Irish Republic’s government has (reluctantly, vaguely, and after much pressure from activists) confirmed that a referendum on the issue will be held in 2018, after a 100-person Citizens’ Assembly recommended that the country legalize abortion in at least some cases. Northern Ireland, unfortunately, is under the thumb of a dangerous coalition between the anti-abortion DUP and Theresa May’s Tories.

It’s still unclear how the Republic’s referendum may turn out – and if voters don’t decide to overturn the Eighth Amendment, things could get worse. Currently, Irish people seeking abortions can fly to Scotland, Wales, or England in the nearby United Kingdom, which is part of the EU Common Travel Area, and get their medical treatment there. However, depending on how the Brexit negotiations are finalized, this may no longer be a possibility for citizens of the Republic once the UK leaves the EU. As a result, it’s more crucial than ever that the Republic of Ireland update its own laws.

And that’s why Irish people and their allies across the world showed up in the thousands to protest for abortion rights as part of the annual March for Choice. This is why we fight to protect our reproductive rights.

1983-2017
This campaign has been running for 34yrs. It needs to end now. LETS DO THIS!#marchforchoice #repealthe8th pic.twitter.com/RGfAhYkaZk

A few snaps from yesterday’s #repealthe8th march in #dublin. Huge crowd. Proud to have been part of it! #marchforchoice #ireland #womensrights #prochoice

(Via The Irish Times; image via Marykate Jasper)