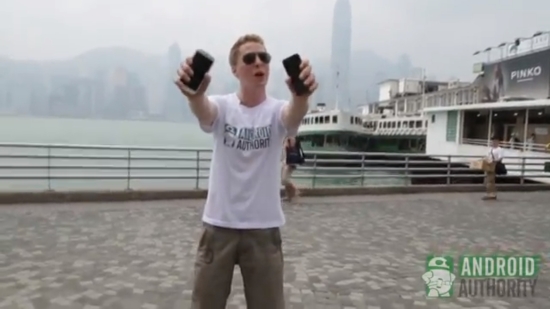 It’s that time of year again, when Apple releases a new device and it and its rival device have to be dropped on a hard surface from terrifying heights. You know, so we learn not to drop our expensive, delicate pocket computers, because we don’t know not to do that before seeing the extent of the damage. With the iPhone 5 shipping today, it’s probably best to get this drop test out of the way so you can be sufficiently scared of dropping your new expensive toy. However, compared to last generation’s iPhone 4S vs. the Samsung Galaxy S II drop test, this test yields some surprising results.

The test, brought to us by the brave folk at Android Authority, is not for the faint of heart.

Android Authority performs a drop of the iPhone 5 and Samsung Galaxy S III at three different heights they deemed to be the most common heights at which people drop their phones. First, from the pocket, then from the chest, simulating dropping it while lifting it up to your ear, then finally from the ear itself. Last year, the iPhone 4S did not fare nearly as well as its Samsung rival, but this year, the iPhone 5 seems to be a tougher device, surviving all three drops without any screen destruction, whereas the Samsung Galaxy S III’s screen sustains damage before the final test. Definitely surprising, because though Apple builds some aesthetically pleasing hardware, we’re certainly not used to it being very tough.

Of course, the Android Authority test, though brave and helpful, didn’t drop the two rival phones at the same angle and onto the exact same spots, so while the above drop test does provide some useful information, it doesn’t provide any finite proof of durability.

Either way, the message is pretty clear: Don’t drop your expensive phone.