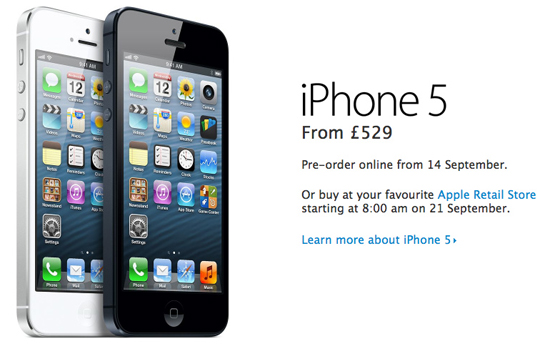 As predicted, Apple fans really, really love Apple gear. The initial batch of the iPhone 5 over at the company’s website was gone within an hour. After that, shipping dates slipped from September 21st. It looks like anything ordered from here on in won’t make an appearance until October. According to Apple, preorders for their mobile phone’s newest iteration exceeded 2,000,000 in 24 hours.

As usual, the demand for the newest shiny has far exceeded the supply. Even though we here at Geekosystem have a tendency to snark at Apple and their fans, the company sure knows how to push gear. Any of the other major smartphone players, from Samsung to Nokia, would kill to get anywhere near Apple’s numbers.

The number of preorders this time around more than doubles the number set by the phone’s immediate predecessor, the iPhone 4S. This is almost certainly due to the fact that 5 is definitely a bigger number than 4. That’s the kind of herd mentality we’re dealing with here, after all. The iPhone 4S was mercilessly prodded for not being the iPhone 5 that everyone had suspected. Now we have the real thing, folks!

Even AT&T is reaping the benefits. The mobile company announced that it’d achieved a sales record, as folks have ordered more of this particular upgrade in one day and over the weekend than any previous iPhone. Nobody wants to be streets behind when it comes to the latest tech.

If you’re still looking to get your fix for launch day, it’s now time to start lining up if you haven’t already.