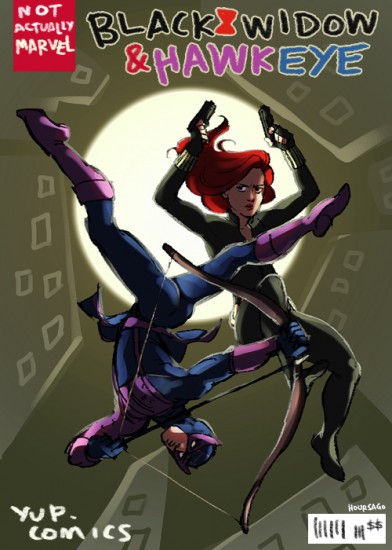 Something special happened on Tumblr this weekend, as many of you reached out to tell us. To those of you who did, I want to say thank you. HoursAgo, whose fanart for Hawkeye, Sherlock, Supernatural, Community, and Good Omens you should really check out, posted this drawing (based on the cover to an All Ages Marvel comic featuring Hawkeye and Black Widow) where the two superheroes have swapped positions and poses. Which you might not think initially, since one might assume that the serious Natasha would be more likely to charge pragmatically feet first, while the more cavalier, showboating Hawkeye would be the one taking a trick shot just for the heck of it.

HoursAgo left some commentary in the tags about how they enjoy drawing male superheroes in the exaggerated and sexualized poses that female heroes get drawn in as an exercise in disproving the idea that men and women are objectified equivalently in modern comics, and also tagged it “the hawkeye intiative.” And from those humble beginnings… Overnight, The Hawkeye Initiative (inspired by, but unaffiliated with HoursAgo) has become a tumblr blog with over ten thousand followers, dedicated to reblogging and posting sexualized poses and poor anatomy… redrawn to be of Hawkeye instead of female characters. Here’s just a small sample of the best stuff on there.