Introduce a Girl to Engineering Day | The Mary Sue

Today Is Introduce a Girl to Engineering Day! 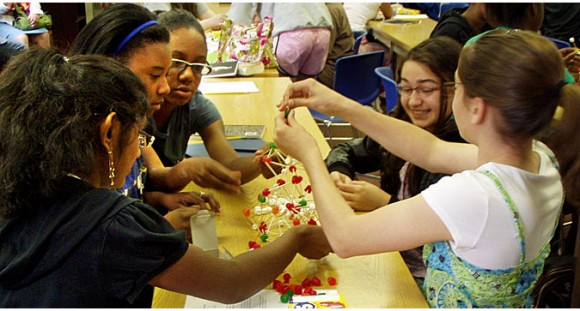 Good news! The number of girls getting interested in STEM fields is increasing! While the number of boys is still greater, more and more teenage girls are considering engineering as a possible career, thanks to a lot of positive messaging. And now, the Intel Foundation has instituted a new “holiday” that will give everyone cause to reach out even more: Introduce a Girl to Engineering Day!

Intel conducted a study on teenagers and their interest in engineering, asking 1,004 boys and girls about if and why they have considered a career in the field. And it looks like the biggest thing keeping girls from exploring it as a possibility is their familiarity with it. A little odd — are that many more boys exposed to engineering than girls are?

Here are a few of the numbers from the study:

*28 percent of teens have considered a career in engineering. Their reasons (because it looks interesting, high salary, positive impact on society, job opportunities, etc.) did not have big disparities between the genders. Meaning, the percentage of girls who thought it looked interesting was almost the same as that of the boys.

*Similarly, 46 percent of males and 44 percent of females believe that if they had more exposure to engineering, they would most likely become more interested in it.

*Here is where the big jump took place: After giving both girls and boys more information about engineering, the number of girls who were interested doubled to 35 percent; the number of boys jumped to 60 percent, but that was only a 23 percent increase. In other words, if you tell girls about engineering, more of them will pursue it. If you build it, they will come.

Wendy Hawkins, the executive director of the Intel Foundation, says that unless there is an engineer in the family, it’s pretty unlikely that a teenager has had much — if any — exposure to engineering. And that’s why the extra effort needs to be made to reach out to them, especially girls. When asked about a specific message for girls, Hawkins said that girls need to know a few things about the field:

Engineers change the world. They solve real problems. They improve lives. And, they live good lives themselves. The best way to make sure that engineers pay attention to the problems that girls think are important, is for girls to get in there and become engineers themselves!

She went on to name a few areas where engineering is important, and probably unexpected for those unfamiliar with engineering as a field: sound engineering for rock stars, building prosthetic limbs for veterans or patients, bringing water to countries dealing with droughts — engineering shows up in tons of places. It’s not just about computers and robots, as much fun as those can be. If a girl finds that she has a better knack for numbers than gym class, art class, or English, then there is still a place for her to shine — STEM fields.

Introduce a Girl to Engineering Day is today, and maybe you’ve only just heard about it. And Engineering Week ends this Saturday. But don’t let that stop you! You can start by sharing the stories about women working in STEM careers on Geek Mom. After that … well, who doesn’t like to extend a celebration a little further?